WELLINGTON (Reuters) - Aaron Finch shrugged off a long slump in form with a defiant half-century and Ashton Agar took six wickets as Australia claimed a 64-run win over New Zealand in Wellington on Wednesday to keep their Twenty20 series alive.

At a closed Wellington Regional Stadium, Australia clawed their way back to 2-1 in the five-match series following defeats in Christchurch and Dunedin.

Fired by 69 from captain Finch and a 31-ball 70 from Glenn Maxwell, Australia put an imposing 208 for four on the board before, led by a dominant display by left-arm spinner Agar (6-30), bundling New Zealand out for 144.

(Reporting by Ian Ransom in Melbourne; editing by John Stonestreet) 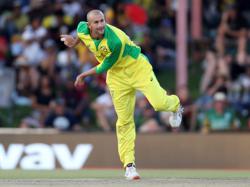