(Reuters) - Experienced batsman Faf du Plessis says South Africa must master the unfamiliar conditions and home captain Babar Azam when they play their first test in Pakistan since 2007 in the opening match of a two-game series that starts in Karachi on Tuesday.

South Africa return to Pakistan for the first time since a militant attack on the Sri Lanka team bus in the city of Lahore in 2009 that killed six policemen and two civilians.

Both sides have a fresh look about them, the tourists introduced a number of new players for their 2-0 home series win over Sri Lanka this month, while Pakistan named nine uncapped players in their squad.

"I think both South Africa and Pakistan are probably similarly placed where they are in terms of the teams," Du Plessis told reporters. "Quite a lot of inexperience and not a lot of Test caps.

"We are expecting it to be a very, very tough ask, they are a very dangerous team in their home conditions."

Pakistan will have Babar back after he missed recent tests in New Zealand with a fractured thumb.

"Having Babar is massive for them. He is up there with the top three batters in the world. His last two seasons, in all formats, have been nothing short of remarkable," Du Plessis said.

South Africa admit uncertainty over what to expect from the conditions. Pakistan has traditionally been more seamer friendly than other sub-continent countries, but early indications are that might not be the case this time around.

"It’s about making sure you are looking at two or three ways of getting off strike," Du Plessis said when discussing a trial by spin.

"You need to make sure you’ve got some plans to either get ones or have scoring options to get some boundaries."

Babar has urged his side to take a positive approach and dictate the flow of the match.

"I want the team to play positive, aggressive and fearless cricket," he said. "We need to be good enough against top-quality sides if we want ourselves to be considered a top team and for that, we need to win series."

The hosts have won only one of their previous seven tests against South Africa in Pakistan, with the visitors claiming two victories to go with four draws.

The second test will be played in Rawalpindi from Feb. 4. 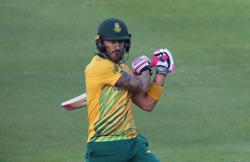