Anderson strikes early for England but Sri Lanka fight back

(Reuters) - James Anderson took two early wickets to rock Sri Lanka on the first morning of the second and final test in Galle, but the home side recovered to reach 76 for two at lunch having won the toss and elected to bat on Friday.

Opener Lahiru Thirimanne, fresh from a century in the first test, is not out on 43, having put on an unbeaten third wicket stand of 69 with Angelo Mathews, who has 26.

Anderson (2-4) returned to the England side in the place of Stuart Broad in what was an expected rotation of the seam bowling stocks and had an immediate impact.

Fiery Sri Lanka opener Kusal Perera had a wild swing at a delivery outside off stump and was caught high above his head by Joe Root at first slip for 6.

Oshada Fernando, who came into the side for Kusal Mendis, lasted just four balls before he edged a rising Anderson delivery that he could have left on to the wickets.

Mendis was dropped after he scored four ducks in a row before his second innings 15 in the last test, suggesting the number three position is a problem one for Sri Lanka.

An unusual lack of rain in the build-up to the test has led to a dry wicket that could crumble early in the test, meaning Sri Lanka will be desperate to set England a challenging target in the fourth innings.

The home side lost the first test by seven wickets after also electing to bat first before being skittled for a paltry 135.

England are seeking a fifth away test victory in a row for the first time since 1913. They travel to India for four matches directly after the completion of this series. 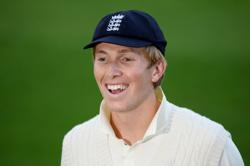