SYDNEY (Reuters) - Australia captain Tim Paine has been fined 15% of his match fee for showing dissent at the umpire's decision following a failed review during the third day of the third test against India in Sydney, the International Cricket Council (ICC) said on Sunday.

Paine was found to have breached article 2.8 of the ICC Code of Conduct -- which relates to showing dissent during an international match -- and one demerit point was added to his disciplinary record.

The incident occurred in the 56th over of India's first innings on Saturday when Paine was confident Cheteshwar Pujara edged a Nathan Lyon delivery to Matthew Wade at short leg, but on-field umpire Paul Wilson ruled not out.

Paine reviewed the call but TV umpire Bruce Oxenford could not see any evidence on Snicko or HotSpot to suggest Pujara had hit the ball with his bat, and asked Wilson to stick with his call.

The decision did not go down well with Paine, with the stump mic picking up his expletive-laden rant about inconsistency in decision-making.

"Paine admitted the offence and accepted the sanction proposed by David Boon of the Emirates ICC Elite Panel of Match Referees and ratified by the ICC Cricket Operations department as per the COVID-19 interim playing regulations," the ICC said in a statement https://www.icc-cricket.com/media-releases/1969452.

"There was no need for a formal hearing."

India face a daunting task to avoid defeat after closing day four on 98 for two, requiring a further 309 runs to win. 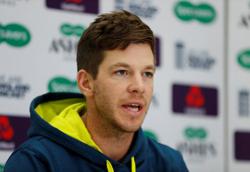