Cricket-Keep calm and play on, officials not sweating on Sydney cluster 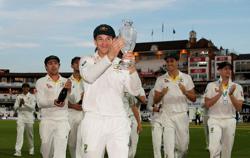 SYDNEY (Reuters) - Cricket Australia are monitoring an outbreak of COVID-19 in Sydney but do not consider the third test against India to be under threat, interim chief executive Nick Hockley said on Friday.

Australian states and territories on Friday begun imposing border restrictions after 28 cases of the virus were detected from a cluster on Sydney's northern beaches.

The third test at Sydney Cricket Ground is scheduled to start on Jan. 7 but Hockley said it was too early to start panicking given how quickly the situation had changed in various cities around the country this year.

"We're monitoring the situation. We're not panicking at all, staying calm," he told SEN Radio in Adelaide, where the first test is being played.

"A few weeks ago we had (an) outbreak (in Adelaide) and through that process we worked very calmly to get the players in on a charter plane."

"We've got the next test in Melbourne ... I think the governments around the country have handled the pandemic so well, so we'll watch, learn and stay in touch."

Hockley said CA's policy of keeping players in biosecure hubs, even when community transmission of the virus was all but eradicated in Australia, should hold the sport in good stead whatever happens with the Sydney outbreak.

"It's been interesting as we've worked through to almost zero community transmission, we've had lots of questions about do we need the hubs," he added.

"Over recent weeks they've not been about protecting people against coronavirus as much as getting tangled up. We knew there were going to be cases pop up, so not getting caught up in this web of people having to go into isolation."

In a reversal of the situation a couple of months ago when Victoria was in strict lockdown and Sydney virtually COVID-19 free, Melbourne Cricket Club chief executive Stuart Fox said the third test could be played at the same venue as the second.

"We're here to support Cricket Australia if need be (but) we hope that doesn't happen to Sydney," he told The Age newspaper.

"For us, all focus is on the Boxing Day test."