The Musketeers Putrajaya Rugby Club called off their tournament a day before it was due to take place.

THE cancellation and suspension of all local and international sports events to minimise the risk of spreading Covid-19 has been greeted with a collective sigh of relief from those in the fraternity.

This came after the country was placed on a two-week movement control order to stem the spread of the disease.

The news came following the announcement by the Education Ministry and National Sports Commission last week advising organisers to hold off all events, echoing an earlier statement by the Health Ministry urging all mass gatherings to be postponed with immediate effect.

The spread of Covid-19, which is now classified as a pandemic, has impacted the sporting world with numerous high-profile events suspended or held behind closed doors in an effort to prevent the situation from escalating.

Many local sports events had been postponed or called off over the past few weeks, although there were several that were holding out on making a final decision until the authorities could provide clear guidelines.

Stakeholders are in support of the move as countries around the world take similar measures to stop the spread of the virus. Sangeeta’s son was due to take part in the MSSM squash tournament in Kuantan.

Amateur runner Choo Teng Chuan said organisers had a duty towards public safety and must act in everyone’s best interest.

“Event organisers cannot in good conscience continue to hold events after what has been happening since last month.

“I am relieved now that the authorities have made the announcement as many events were still scheduled to go on as recently as last weekend,” he added.

Parents and guardians were also naturally concerned about their children’s safety.

Sangeeta Sidhu, whose son was due to compete in squash at the ongoing 2020 Malaysian School Sports Council Games (MSSM) in Kuantan, Pahang, believes that the public should be guided by the views and advice of medical experts.

“My child’s personal safety supersedes everything else.

“This is a very serious matter as the virus is spreading rapidly.

“As parents, we are naturally very concerned, and welcome the decision by the Sports Commissioner and Education Ministry.”

The call to postpone sports events have, however, left clubs like the Musketeers Putrajaya Rugby Club in a bind after months of preparations to host its inaugural invitational tournament came to nought.

Club chairman Nasir Zakaria said while the Musketeers would have to forfeit money spent in organising the event, players also missed out on developing their talents.

The tournament was cancelled just one night before it was to take place, after discussions with other teams and parents.

“While we hate to see our hard work and preparation go to waste, we also wanted the children to gain valuable experience while competing among other clubs.

“But we can’t do much about it. Ultimately, the welfare of the children is our priority.

“Being in Putrajaya means we are also close to government offices so we have to be extra responsible in ensuring that we do our part in stopping the virus from spreading further.”

Notwithstanding that many are heeding the advice from the authorities to suspend sports events amid the health risks, it remains unclear how the situation will develop.

As of this week, thousands of students and athletes will be affected by the postponement of the MSSM and potentially the Malaysia Games in Johor, which could possibly have a bearing on their future performance and ranking.

Football Association of Malaysia (FAM) and Malaysian Football League have also decided to suspend all football competitions until further notice.

Eleven sports events were due to take place during the first semester school holidays this week at the MSSM.

Beyond continuing their training, there is nothing much the students and their coaches can do. JDT (in white) and Police players battling it out during a Super League match last weekend. FAM has suspended all matches indefinitely. — Filepic

“Our athletes are disappointed that they will not be able to compete this school holidays after putting in a lot of effort in training.

“Swimmers will continue to train unless the city is locked down or if we get a directive to stop training. We definitely support any decision made for the good of everyone,” said an MSSM swimming coach

The Education Ministry’s Sports, Co-curriculum and Arts Division was unable to comment at press time.

The athletes will take their cue from any decision made while eagerly awaiting the resumption of normal life, including sports events. 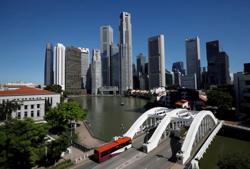