No shortage of young hockey talent

A tense moment at the goalmouth of Zenith Schools as the players tussle for possession.

THE second Foco Under-12 C. Sivasubramaniam Cup Indoor Hockey Tournament proved to be more than just a competition.

Organised by the Klang Crows Hockey Club – a group of hockey lovers comprising former state and international players – the competition had no entry fee for the participating Under-12 teams.

The tournament is the brainchild of players who trained under veteran hockey coach C. Sivasubramaniam.

It had one aim – to promote the growing sport of indoor hockey to the all-important grassroots division.The event recently concluded with an intense battle between the finalists – Ultimate Black and Zenith Schools – at the Real Sports Arena in Klang.

Watching the intensity of the decider, one would not have been able to tell that players from both sides were actually from the same club. Ahmad Azuan hopes to see more tournaments that give youths a  chance to play competitively.

Ultimate Hockey Club head coach Ahmad Azuan Syahrill Zenith explained that the club had formed a team under the banner of Zenith Schools to represent their name in the tournament.

“We are carrying the name of Zenith Schools because they put their trust in us and have supported the players for this tournament.”

He did not expect his players to take first and second place.

“We have competed in many other tournaments but this is the first time that we have met each other in the final,” he added.

The final saw a keen battle as both sides competed hard to gain an edge in the 15-minute final after a full day of matches.

The level of play exhibited, from skilful and disciplined execution to quick and precise passes on the FIFA-regulated futsal pitch by the Under-12s, was a treat for spectators.

Zenith Schools ultimately edged their counterparts to clinch the title after scoring just before half-time and holding onto their lead until the final whistle.

Their only goal came from Haziq Safuan Haidi Supian, who found the top left corner of Ultimate Black’s goal through a penalty corner.

Finishing in joint third were ACS Tigers A from Klang and Paya Rumput Juniors from Melaka, which were among the 20 teams that participated. 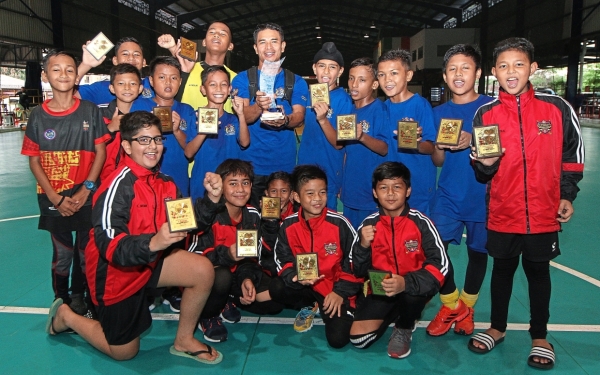 The other teams were from Selangor and Perak.

“We wish there were more tournaments like this. It is good for the country’s hockey as it allows more players to hone their skills and, in the long run, create a larger talent pool,” said Ahmad Azuan.

“There are many players here with potential, but they may not have the opportunity to develop their talent further because tournaments are limited and the costs involved in organising them high.

“We are also glad that this event took place after the regular school hockey season and that it is an open tournament so anyone could enter without restrictions.”

He also lauded the decision to have the Under-12 tournament as an indoor hockey event as it gave his players a chance to try something different.

“Indoor tournaments are great for astroturf players because the game is really fast so this teaches them to be disciplined in their fundamental techniques and develop quick reflexes.”

The former Selangor Razak Cup player and current Terengganu veteran player said the Ultimate Hockey Team also had a similar philosophy as the tournament by providing training to the children at no cost.

“We don’t charge any fees but we receive funds from parents who are able to afford it. This is so that we can create a family-like environment for the players,” Ahmad Azuan said.

Ultimate Black team coach Mohd Nizam Nordin said the competition was a good stepping stone for the children to improve their game.

“The organisers have created a great event for junior players and to have it without any kind of entry fee is laudable.”

It was officiated by volunteer referees comprising former state and national hockey players as well as an internationally qualified umpire.

Organising committee chairman C. Pathmanathan said in addition to the cost of rental and prize money, they also provided food as well as indoor hockey sticks for those who did not have the proper equipment.“Putting together a tournament like this is very tiring for us working adults. But with help from supportive parents, we are happy to do it for the children.

“There was a lot of excitement for this competition and the families’ attendance encourages us to keep going.

“We will be back again for another edition for sure because we don’t want to let them down. The tournament is named after Sivasubramaniam, who was thrilled by the quality of play exhibited.

“There are not many indoor tournaments so we hope to have more teams coming from other states as that can also spur the youngsters to do even better.”

Pathmanathan added the club did not get much support other than from its own circle of sponsors, volunteers and the Klang District Hockey Association when organising the tournament.

“There was not enough money to cover expenses so each of us chipped in. We will try to get more sponsors next year so that we can give the children an even better experience.”

Sivasubramaniam, who was preآ­sent for the entire duration of the tournament, said he was impressed by the high quality of play.

“I could see that the standard of the players was higher this year compared to 2018.

“The coaches, some of whom are teachers, have done a fine job in grooming them with basic and advanced skills,” he said.

“Indoor hockey is becoming a big thing now. In the coming SEA Games, there is an indoor hockey event but not for field hockey.

“This format is also good for the field players as it will help them with their outdoor skills.

“In Sarawak where I am an