(From left) Yeoh, Soon and Tan posing for a group photograph with the Under-21 archery squad at the Penang International Airport. — Photos: LIM BENG TATT/The Star

Twin sisters Priyaswary and Pritiswary Muniswaran, 16, were outstanding as they contributed six gold and two bronze to the medal haul.

Pritiswary said both she and her sister trained between three and six hours almost every day.

“It is not easy to study and train at the same time but we managed to do well in our PT3 examination last year,” she said.

After the recent superb outing at Soemantri Brodjonegoro Stadium in South Jakarta, Indonesia, the duo have now set their sights on the Malaysia Games (Sukma) 2020 in Johor next year. 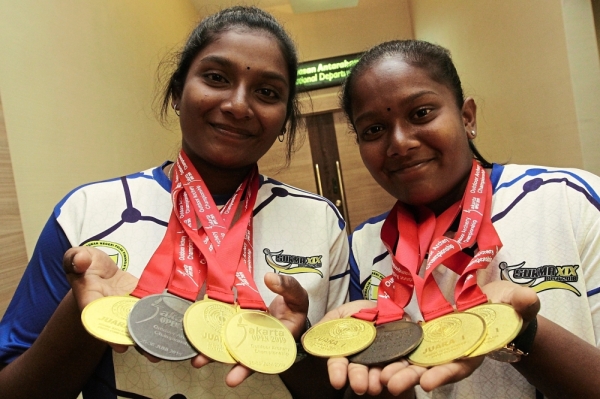 They secured podium finishes in the last Sukma.

Their coach Salina Putriana said the archery team had performed exceptionally well in the competition.

“The archers who went to Jakarta are aged between 14 and 21 years old.

“We took part in 16 categories and emerged as the overall champion,” she said, adding that her team would continue to train hard and give their best in Sukma 2020.

State youth and sports committee chairman Soon Lip Chee, who welcomed home the team at the Penang International Airport, said the hardwork and dedication of the archers and coaches had paid off.

He also said all athletes should gain exposure and experience by taking part in inter-state and international competitions.