Alex (right) sharing tips on how the participants can perform better during the two-day event.

THE first-ever simulator racing championship in Malaysia, the eRacing Grand Prix SEA, raised its curtain when the first leg of the time trials was held at the Malaysia Speed Festival (MSF) at Sepang International Circuit.

With the objective of transforming virtual racers into real-life motorsport champions, the two-day event saw many participants competing to make it to the Top 45, to advance to the semi-final.

Alex expressed his excitement over seeing the positive response to the first-time trials and he is expecting more potential racers to take part in the next legs of the time trials, scheduled for today and tomorrow.

“I would like to thank all the sponsors and my team who are working extremely hard to make this event a success.

“I also want to thank the participants for making it all the way to Sepang from as far as Penang, Terengganu and Perak, to take part in the time trials,” he said.

“We have received tremendous response from some professional e-gamers during the time trials and I was impressed with the high standards of their driving skills.

“For the next time trials at Atria Shopping Gallery, I am expecting a bigger pool of different types of drivers. 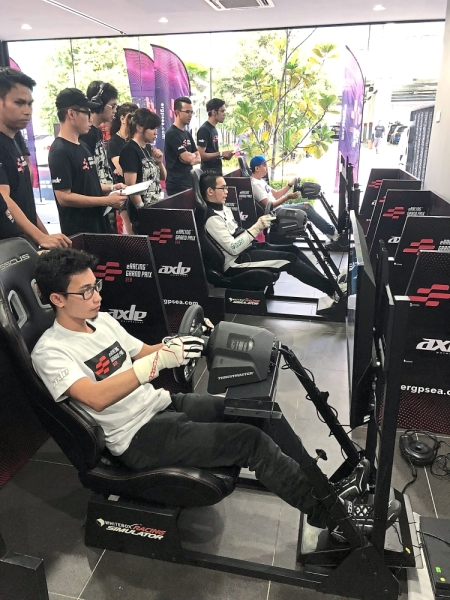 Some of the participants who took part in the first leg of the eRacing Grand Prix SEA time trial at Sepang International Circuit.

“I would like to urge everyone to witness what we are doing for the love of motorsport and the art of driving.”

One of the participants, Eric Kanavathi, was delighted when Alex shared some tips on how they could improve their times and get better results.

“It was good fun trying out the simulator which also featured the Suzuka Circuit, one of the hardest tracks in the world.

“It was very technical but once I got used to the car and the simulator, it got more exciting.

“We got so much more than we paid for when Alex gave his input on how we could improve our time,” he said.

Eric is of the opinion that the tournament is the start of a new revolution in motorsport. The 30-year-old added, “This competition caters to people of all ages and provides the opportunity of a lifetime to be exposed to the motorsport scene.

“No doubt this sport is expensive but a championship such as this is the perfect start for our motorsport industry to move into a new direction.

The eRacing Grand Prix SEA time trials will resume this weekend with the second leg to be held at the Centre Court of Atria Shopping Gallery, Petaling Jaya today and tomorrow.

The Grand Prix will then head to the Philippines, Indonesia, Singapore, Vietnam and Thailand where the winner of each country will be trained and offered a spot in the Formula 4 South-East Asia Championship (F4SEA), an experience worth €100,000 (RM470,000), which will be the first step towards becoming a professional race car driver.

Hamilton adds another country to his map of F1 domination