Early goals do the trick for Red Star

The top players who were selected to form the Central Region team.

Both goals came in the fifth and 23rd minute but a late rally by Wira Semenyih FC in the second half, courtesy of a consolation goal by Muhammad Hakimi in the 56th minute, left Red Star seeing out the final minutes nervously.

“I am delighted with today’s result, the boys played well and all our hard work resulted in this victory.

“We started building this team two years ago and the boys performed well throughout the tournament.”

The Red Star squad had more reasons to celebrate as Keenan Goh was voted the Man-of-the-Match in the finals while Muhammad Harith Imran was picked the Most Valuable Player of the tournament.

Meanwhile, AAB-MBSA finished third in the third and fourth match playoff, thanks to a solitary goal by Muhammad Haikal in the 26th minute in their match against Tunas Lagenda FC 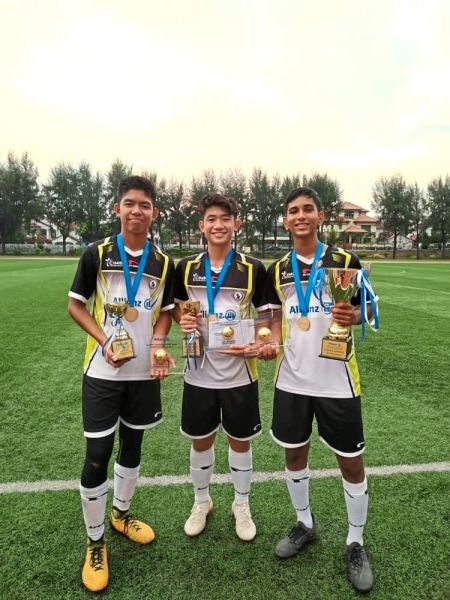 (From left) Harith, Keenan and Madhav from CIMB-YFA Red Star made the final cut.

Following the final, the top 18 players were selected to form the Central Region team.

The team will compete against five other regions in the Grand Finals from July 4 to 6 at the Arena Majlis Perbandaran Subang Jaya, Subang Jaya.

At the Grand Finals, players will be looking to impress the AJFC Malaysia League selection panel headed by former international defender K. Gunalan to become one of 10 players selected to participate in the Allianz Explorer Camp – Football Edition in Singapore from July 23 to 26.

There, the players will take

part in training drills and compete for two spots to be part of the Allianz Explorer Camp – Football Edition in Munich from August 22 to 27, where they will get to train with FC Bayern Munich’s youth coaches at the team’s training ground at Säbener Strasse in Munich, Germany.

AJFC was launched in Malaysia in 2012 and is open to aspiring footballers aged between 14 and 16 years.

To keep up to date with the AJFC Malaysia League 2019, visit allianzfootball.com.my