Search is on for young badminton stars

Wong and the juniors during a training session.

THE Astro Kem Badminton is back for the seventh consecutive year to give young boy and girl shuttlers an opportunity to pursue their badminton dreams.

Six selection camps are to be held around the country; the first started in Penang last weekend and will be followed by camps in Kota Baru, Kelantan (tomorrow); Johor Baru (April 5); Kuala Lumpur (April 13); Kota Kinabalu, Sabah (April 20); and Kuching, Sarawak (April 27).

At the selection camps, children are selected based on their

playing skills, techniques, stamina and attitude by world-renowned badminton coaches such as 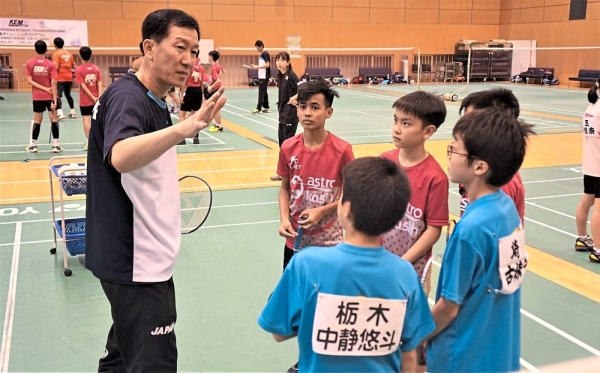 A total of 60 children selected through the selection camp will then attend an intensive training camp in Kuala Lumpur for five days.

Here, they will be taught to further sharpen their playing skills by a group of coaches who are certified by Badminton Association Malaysia (BAM).

Once completed, 30 (boys and girls) will be further selected for an overseas training stint at an internationally-renowned training centre.

In the past, children from Astro Kem Badminton have trained at the Li Yongbo Badminton School in China, where greats like Lin Dan trained; the Ajinomoto National Training Centre in Kita, Tokyo, where the children trained under the prestigious Japanese National Junior’s team and met with Japan’s national head coach and Men’s doubles legend Park Joo-bong.

Razif (two-time MSSM Men’s Single champion) and Justin Hoh, who together with Fazriq, were gold medallists in the Jakarta Junior Open in Indonesia; Badminton Asia Junior Under-15 in Myanmar; and the Singapore Youth International Series, all in 2018.