THE national deaf futsal squad narrowly missed out on qualifying for the World Deaf Futsal Championships in Switzerland in November on their first-ever outing when they finished fifth at the Asia-Pacific regionals.

Known as the Malaysia Deaf Tigers, the squad ended their campaign in Bangkok just outside the top four qualifying spots to miss out on a spot to represent the Asian continent.

The Tigers, led by Thai deaf futsal coach Manachai Sittisarn, were placed in Group A alongside hosts Thailand, Mongolia, Indonesia and Kazakhstan while Group B consisted of defending champions Iran, Singapore, Japan and China.

Malaysia did not enjoy a favourable start to the championship, as they squared off with Kazakhstan in their opening match and were outclassed 5-3.

Malaysia bounced back with a 6-1 victory against Indonesia on day two of the competition, courtesy of goals from Muhammad Haris Kamarudin (two), Muhammed Baihaqi Abdullah, Mak Chee Weng and Muhammad Firdaus Sabudin (two).

Team manager Yusri Abd Ghani said his charges were more confident on the court during their second game compared to their first match against Kazakhstan.

They followed up with a 24-4 lashing of Mongolia, with skipper Chee Weng scoring 11 goals. The 12-man squad had a commendable outing in the Asia-Pacific Deaf Futsal Championship 2019.

Their fourth match against hosts Thailand, which proved to be the most difficult, also ended their hopes of progressing to the semi-finals.

It was a close fight between both sides with the score at 3-2 in favour of the Thais at half-time when Chee Weng scored his second goal of the match to equalise at 3-3.

Both sides were evenly matched early in the second half but the team had to bow out after the opposition were able to put two in the Malaysian goal in the 28th and 34th minutes.

Assistant coach Ali Che Ahmad had no doubt that the team, which only started undergoing centralised training in late December in Terengganu, had given their best.

“The match against Thailand was very close but we accept the result.

“Even though we lost out on a ticket to the World Championships, we still wanted to do our best in the last match against the Chinese,” he said.

In the fifth and sixth placing match against China, Malaysia secured a 13-8 win to leave Bangkok on a positive note. Mohamad Haris (centre) fending off two Chinese players in the play-off for fifth and sixth placing.

Yusri lauded the players for staying strong in their final fixture.

“Almost all our players sustained some injuries during the match against Thailand including Chee Weng, who had a small wound on his knee.

“But I could see that they did not use it as an excuse to give up. Instead, it didn’t stop them from giving their best to take another win,” he added.

Yusri also hoped that the public and corporate sector would be able to provide financial assistance to allow teams like the futsal squad to secure training venues in the future.

“One of the challenges we faced was not having enough training because of the lack of funding to enable us to train for a longer period,” he said.

Malaysian Deaf Sports Association president Ong Shin Ruenn said while the target for the team was the semi-final and qualifying for the World Championships, the Malaysian side did well against stronger and more experienced teams like Kazakhstan and Thailand.

The third edition of the prestigious futsal tournament for deaf athletes in the Asia-Pacific region was held at the Huamark Indoor Stadium in Bangkok, Thailand.

Along with finishing fifth, the Malaysian contingent were also awarded the Fair Play Team Award for their sportsmanship and discipline while Chee Weng, who also featured in last year’s Perak Sukma squad, earned himself the tournament’s Golden Boot Award for scoring 22 goals. 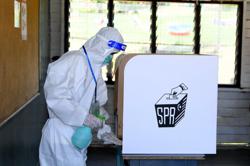