Lauren (centre) playing a match with the boys.

DEFEATING stereotypes, 12-year-old Lauren Hoh was the only girl in her football team and one of the only two Malaysians to be selected as a “Young Ambassador” for the global Football for Friendship (F4F) social programme organised by Gazprom and FIFA.

It was the first time Malaysians were taking part in the programme alongside children from around the same age group from 210 countries.

Currently a student in Beaconhouse Sri Inai International School, Lauren said she fell love in with the game at the age of seven.

“When I was seven, my brother used to go for football coaching and I would tag along. Watching their games, I would kick around the plastic bottles and cans.

“Eventually, I convinced my mother to let me join the class as long as I kept my grades up. Soon, I made it into the league team and started competing in tournaments.,” Lauren said.

She heard about the programme from a football coach and was encouraged to try it out. After sharing her hopes and passion, and with her parents’ support, Lauren attended the interview to qualify.

Not long after, she received the great news that she was selected as one of the representatives going to Russia. 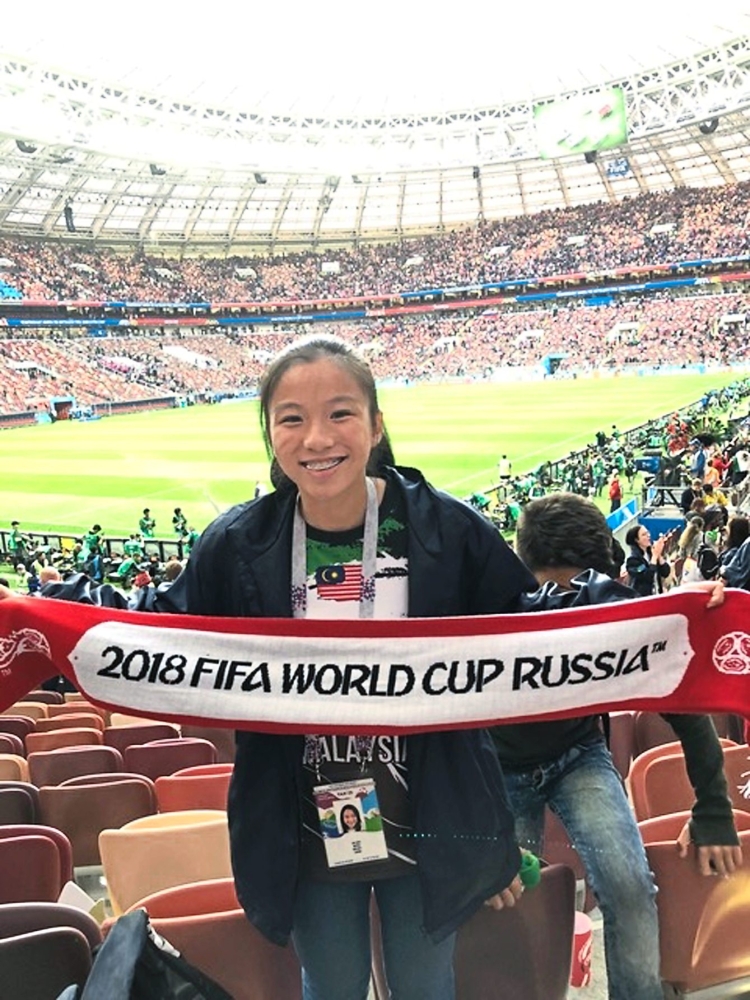 Hoh had a once in a lifetime experience in Russia.

Once there, Lauren, along with other children her age, were divided into 32 international friendship teams named after endangered animals of all the continents as part of environmental conservation efforts.

In Team Zebra, Lauren was given the opportunity to be a journalist and was tasked with covering the day’s events and highlights.

“We had to write for a newspaper, cover the activities and even do short video clips talking about it. I interviewed many people and it was interesting to know their thoughts,” Lauren said.

As part of her journalistic duties, Lauren had to promote the key values of the F4F programme such as fairness, peace, equality and respect. These values resonated well with Lauren as she believed that the lessons one learns in sports can be applied in everyday life.

“In football, I learnt that everyone should be fair with one another, we play without bias.

“You’re supposed to play by the rules and not resort to cheating. When we sit for exams, it’s the same thing,” Lauren said, adding that teams that often win football matches are those that work well together.

Learning to cooperate with others towards a common goal in sports is what builds character and friendships, and strengthens qualities such as accountability and responsibility, she added.

Despite the differences and distance, Lauren still keeps in touch with the friends she made over there.

“Some of them are from Aruba, Sweden, Egypt and the UAE. We learnt a lot about each other, our backgrounds and cultures. Despite our differences, we got along well because we share the same passion for football”.

It was like a dream come true for Lauren to watch the opening World Cup match between Russia and Saudi Arabia in Luzhniki Stadium. Lauren posing for a photo with Zabivaka, the official World Cup mascot.

“The entire experience of the first match was amazing, you could feel the awesome spirit of the Russian fans cheering on their team.”

She also had the opportunity to meet iconic Spanish football star Iker Casillas who attended the match.

Back home, Lauren continues to juggle her packed schedule between her passion and studies. She trains for two hours, three days a week after school and has matches every Sunday.

Despite her dedication and time to football, Lauren has managed to score the highest in her checkpoint examination under her school’s Cambridge curriculum.

She concludes with advice to her peers, “Always chase your dreams and don’t let anyone tell you that you can’t.”