A number of experiential booths were set up at the event to educate participants on mental health.

Held at Technology Park Malaysia in Kuala Lumpur in conjunction with the World Mental Health Day, the run took place at night to represent the darkness surrounding mental illness.

The run, which included 5km and 10km categories, was organised by the MMHA, a non-profit organisation dedicated to promoting community well-being and providing mental health services for those suffering from mental health issues.

With the theme of ‘Young people and mental health in a changing world’, a number of educational booths were also set up during the run to give participants the chance to learn about mental health before sweating it out.

With statistics showing that mental health issues affect one in three Malaysians and a worrying trend of increasing number of individuals suffering from mental disorders and issues, the MMHA believes that awareness, understanding and managing mental health can help in detection, managing and prevention. 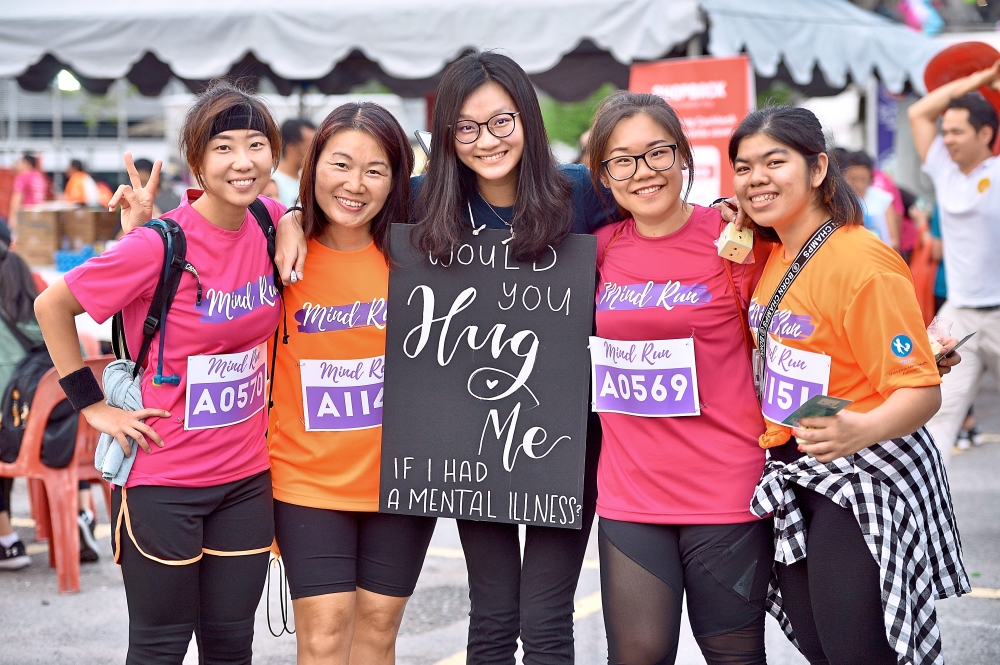 The run also saw many positive engagements between participants and those trying to create better awareness of mental health.

“We are active all year round but our focus is on raising awareness of mental health issues. We are also aware that approaching teenagers is very important now,” he said, adding that the theme of World Mental Health Day 2018 was in line with the MMHA’s aims.

“Identifying the issue or problem is very important, right now it is done when people bring their wards or children to hospitals and sometimes cases are diagnosed accidentally.

“But this is not enough, I think the greater challenge is how we can reduce stigma and discrimination,” he said, citing those who are aware of the situation but not prepared to accept people with mental illness.

“As we know when a person in a family has chronic mental illness, it is not just that person who is affected but the whole family as well. So there is a tendency for the

caregivers to have burnout as a result so we must not ignore their needs too,” Dr Mohanraj added.

“Getting treatment and medication is something that is very normal in developed countries. It should be seen as something normal in Malaysia since we aspire to become a developed nation,” he said. Khairy (centre, in pink), Dr Ong (on Khairy’s left) and Dr Mohanraj (in blue) with participants at the start of the run. — Photos: RAJA FAISAL HISHAN/The Star

Rembau MP and former Youth and Sports minister Khairy Jamaluddin echoed Dr Ong’s sentiments, adding that it was key to send a message to the younger generation.

“We need to get the message out there that there is no stigma associated with seeking help health for mental health issues.

“During the five years that I was Youth and Sports minister, we focused a lot on physical well-being and fitness especially through programmes like Fit Malaysia.

“One of the things that we need to do for the well-being of all Malaysians is for us to enhance our mental health.

“It is not enough for you to have physical fitness, you have to be mentally fit as well. There are a lot of people who are completely functional physically but suffer from tremendous mental illness.”Dr Ong and Khairy both participated in the 5km run. Subang Jaya assemblyman Michelle Ng Mei Sze said the fight against stigma toward mental health illness was the responsibility of the government, NGOs as well as the public.

“As representatives, we need to educate ourselves as well about mental health in order to champion it, and I call upon other MPs and assemblymen to come aboard.

“We might not know how serious the situation in our constituency is until we dig it out,” she added, after noting that the Subang IPD recorded nine cases of suicide this year.