They won both the Masters and Veterans categories, and each winning team pocketed RM1,500 during the one-day challenge at the Polo Ground in Penang.

Aziz produced the killer touch midway in the second half before Shanmugam delivered the second blow just moments later.

Their veterans, not to be outdone, were also in their element as they finished top in the round robin competition with five wins and a draw.

“The double finish is something which we never really expected.

“Our success belongs to the players.

“Our veterans were determined to regain the crown we last won in 2016 while our team in the Masters challenge wanted to do the association proud.

“This is the first time we are crowned Masters champion in the category which was introduced in 2015.

“Former greats like Shanmugam and Aziz went out there and got the job done,” he said. 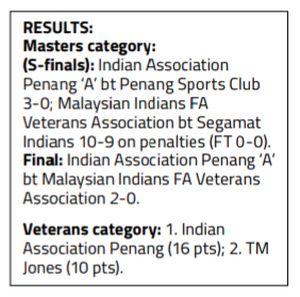