Ending the World Cup on a high

IT HAS been a memorable month for football fans as the World Cup has been the flavour of the month with plenty of talking points, memorable action and fantastic goals to reminisce about.

France emerged deserving winners but not before the neutral’s favourite underdogs Croatia gave them a run for their money.

Robbie Fowler and Paul Scholes were the star attractions as the Genting Football Fever 2018 came to an exciting end at Resorts World Genting in Kuantan, Pahang.

The Genting Football Fever 2018 celebrated the world’s most loved sport by kicking off the festivities with appearances by football legend Michael Owen during the opening of the games.

Fans turned up in droves to see the former England striker in person at the meet-and-greet sessions, a football clinic and at the opening match viewing party. 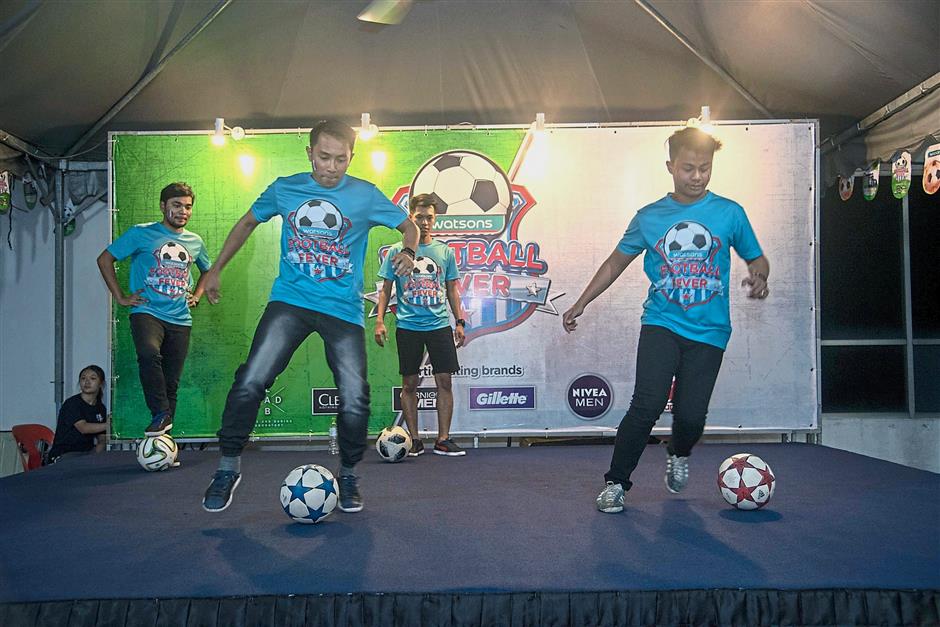 There were plenty of activities for everyone at the Watsons Malaysia viewing party in Bukit Jalil, Kuala Lumpur.

The activities kicked off on June 14 with a fun-filled roster of activities at the Football Village built specifically for the event at the Arena Courtyard, in front of the Arena of Stars that continued until the finals last Sunday.

The revelry, celebrated at 6,000 feet above sea level, included live games screened at the Malaysian Food Street and various dining outlets throughout the resort.

Resorts World Genting promotions and entertainment vice-president Kevin Tann said, “We are proud and excited to have Robbie Fowler and Paul Scholes for the closing of Genting Football Fever 2018 and to set the mood for the football festivities.

“We believe we’ve made an impact on the nationwide celebrations with unique experiences fans won’t find anywhere else. The activities included a once-in-a-lifetime chance for fans to watch the exciting matches with Fowler and Scholes providing live commentary in person.” Scholes (left) and Fowler wowed the crowd with their friendly and laid-back style at the Genting Football Fever event.

Not to be left behind, Watsons Malaysia also came up with an exciting line-up of football events and “Gifts with Purchase” promotions in partnership with leading brands such as Bad Lab, Clear Men, Garnier Men, Gillette and Nivea Men. There was also limited-edition New Balance FIFA World Cup exclusive range of shoes and footballs that were given away as well as the company received support from the Malaysian Indian Football Association (MIFA) whose players were present at the final viewing event.

“Living a healthy lifestyle is what we always advocate at Watsons and what’s more timely than to celebrate the world’s biggest sporting event, and at the same time rewarding our loyal customers.

“We are privileged to partner with leading brands to celebrate the World Cup with a special gift with purchase promotion and limited-edition product contest giveaways to Watsons members nationwide and also free football viewing events passes nationwide to embrace the excitement of selected matches.

To celebrate the memorable once-every-four-years occasion, Parkson gathered 200 Parkson Card Members to “Kickin’ it to Russia: World Cup Final Night!” at Parkson M Square Mall Puchong as they watched France and Croatia battle it out. The event encouraged Parkson Card Members to enjoy watching the final match on a 18-by-10 feet LED screen under the stars as the tournament came to a close.

To make the experience even more memorable, celebrity football fans: Ivan from Fly FM and Ammar from Hot FM joined in the fun and excitement with plenty of exciting activities lined up.

Participants were given a chance to show off their football skills with fans cheering them on as they joined in activities such as human foosball, penalty shootouts and for video gamers there was also a PS4 football challenge.

Meanwhile, more than 400 fans had the pleasure of watching the finals at Golden Screen Cinemas (GSC) 1 Utama, thanks to Coca-Cola’s collaboration with GSC.

“France played well and truly deserved the win. I have been supporting France for more than 15 years. This year, the players showed excellent attitude on the pitch.” said France fan Antony Mariadass.

Croatian supporter Mohamad Faiz said, “It is very sad to see the underdogs lose the match. They really played very well this campaign and had beaten big teams like Argentina and England to get into the finals.”

One of many neutral fans, Chua Song Ren said, “I really enjoyed the match. Both teams were very competitive and this is what I expect from a FIFA World Cup finals. I can feel the stadium atmosphere while watching it in here on the big screen and I really liked the match screening at GSC Cinema.”