Chong Wei has brought so much joy to Malaysian sport.

NOW that the storm and excitement that GE14 generated is over and things have settled with a new Government in place, the sport fraternity eagerly awaits the appointment of the Youth and Sports Minister.

While politics is part and parcel of any democratic country, sport enjoys an exalted place as it plays a vital role in unifying the masses, be it in cheering shuttler Lee Chong Wei in a world-class event or a Malaysian team in the final of a tough competition.

Sport, unlike politics, brings people together as this has been seen time and again.

The percentage of support for the various political parties in the recent General Election is testament to how divisive politics can be – while the majority voted for a change, a substantial number were faithful to those parties that are not in the ruling Government now.

In sport, however, there is no such thing, as Malaysians come together as one to cheer the nation’s athletes.

Given that, the big question now is will the Youth and Sports Ministry have a major role to play under the current administration and to what extent will the support from the Federal Government be.

The Government has already said it will practise austerity and there will be spending cuts for all ministries and there is no doubt that has to the case, given the current financial situation.

However, in saying that, the national athletes deserve the same attention the other segments of society will receive from the Government for the athletes are equally important to Malaysia.

Sport, when Tun Dr Mahathir Mohamad was first elected Prime Minister in 1981, came under the Culture, Youth and Sports Ministry and it was, at best, a junior ministry.

When former Prime Minister Datuk Seri Najib Razak was the Youth and Sports Minister between 1986 and 1990, the maximum annual allocation under the Budget was RM90mil.

That increased to a maximum of RM138mil when Tan Sri Muhyiddin Yassin was the minister in charge from 1995 to 1999, a substantial increase as Kuala Lumpur was awarded the 1998 Commonwealth Games.

Fast forward to 19 years later, the Youth and Sports Ministry’s budget for 2018 was RM800mil and the major reason for the substantial increase was the success the nation’s athletes enjoyed in the 1998 Commonwealth Games and the 2001 SEA Games, also hosted by Malaysia.

In fact, the athletes have, thanks to Tun Mahathir’s policies during the later part of his first tenure as Prime Minister, delivered much success for the nation.

His policies – no doubt due to the unifying factor – saw his successors following suit and my humble request to the Government is to continue the policies that have seen Malaysian athletes emerge as world beaters.

The sacrifices of the athletes must not be forgotten for they have sacrificed much, committing their youth towards attaining excellence.

That, however, doesn’t mean there should be lavish spending and the first step that has to be taken is to review all programmes under the Youth and Sports Ministry.

Programmes that are wasteful should be binned but the ones that delivered results should be strengthened further to ensure that the elusive Olympic gold is won in Tokyo 2020.

The Government, should it decide to reduce its spending on sport, should consider reintroducing the “Rakan Sukan Programme” of the 1990s which saw corporate giants paired with National Sports Associations (NSAs).

For a start, the NSAs which have consistently delivered results should get the first bite of the cherry and hopefully, this will spur those without their own “Rakan Sukan” to get their house in order to enjoy the same privileges.

He may be on the other side, but credit must be given to former Youth and Sports Minister Khairy Jamaluddin for introducing programmes such as Hari Sukan Negara (National Sports Day), FIT Malaysia and the National Football Development Plan (NFDP), among others.

Khairy also led by example and his efforts were recognised in Parliament even by those who were then in the Opposition.

He had, unfortunately, issues to deal with which included corruption in the ministry as well as the infighting in NSAs. Despite this, Khairy worked hard to lift the standard of sport in Malaysia.

Khairy, without the shadow of a doubt, had good support and those in the ministry who contributed to the rise of Malaysian sport must remain part of the set-up and Chief Secretary to the Ministry Datuk Lokman Hakim is one of them.

A vastly experienced civil servant, Lokman will be a huge asset to the new Youth and Sports Minister, who will need to be shown the ropes and given advice on how the ministry should move forward.

An avid badminton player, Lokman can play a major role in the restructuring of the National Sports Council (NSC) and the National Science Institute (NSI), whose roles need to be clearly defined or both should just be merged.

Lokman can also be the link to the Education Ministry, which plays a key role in the development of athletes at the grass-roots level.

Simply put, there is no way the two ministries can afford to not work together and both ministers must ensure this is the case without any party fearing that their role will be under threat.

Tun Mahathir may have started his first stint as prime minister by giving sport a minor role in nation building, but it was his decisions that played a vital role in taking sport to where it is now.

In his second coming, my sincere hope is that he plays a key role in taking it even further for there is no denying that while politics divide, sport unites. 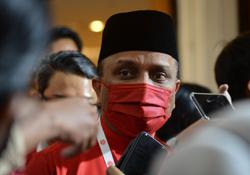