IT IS NOT every day that you get to run a race and be awarded with a prize at the end of it.

For S. Sanggeetha, her run at the Malaysia Women Marathon was not only special but it came with a surprise ending.

She raced hard that morning, pounding the hilly route in the half marathon race alongside favourites Loh Chooi Fern and Chua Khit Yeng.

“It was tough, I chased Chooi Fern for more than half the race trying to keep up with her,” said the administrative assistant.

At the 13km mark, she finally made her brave move and overtook Loh.

Sangeetha, who has been training hard for the upcoming Standard Chartered KL Marathon, maintained her pace to finish the race ahead of the pack.

“The route this year is not easy, there were so many hills and we also had to do a loop,” said Sanggeetha, adding that it was mentally tough as well but she was glad to have completed the race strong in 1 hour 37 minutes 27 seconds. The pacers getting ready at the starting line before being flagged off.

At the prize-giving ceremony, she was announced the Women’s open winner for the category.

The 31-year-old had not only completed the 21km race gracefully but had also broken the race record of 1hr 38mins 24secs set by Sweeny Choong in 2013.

“It’s crazy, I didn’t expect to set the record and I am so happy,” said Sanggeetha, who trains daily.

She added that the win serves as a great motivation for her to push further for her “Big Race” next month.

Second-place winner Chua, who finished more than a minute later, was also pleased with her performance citing the uphill route was a factor for her. 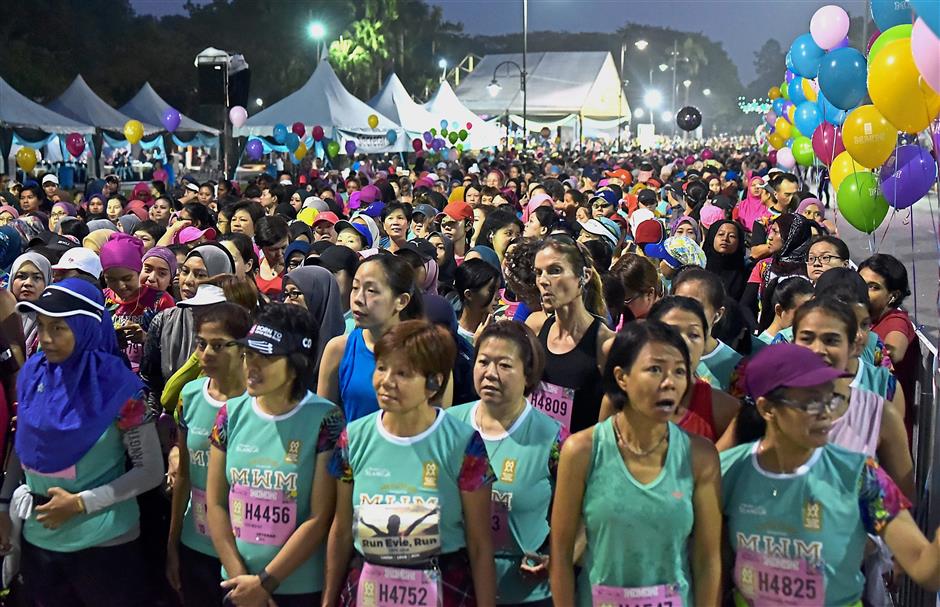 Participants getting ready at the starting line before being flagged off.

The 10km category was snapped up by Kenyan, Regina Joshua followed by Ong Ee Ling and Chng Suat Ping.

The annual women-only event held in Shah Alam attracted close to 5,000 participants with a handful of men joining in as pacers for the race.

The event had four categories; full marathon, half marathon, 10km and 5km.

Participants were flagged off from Dataran Kemerdekaan and through several popular spots around Shah Alam city.

At the finish line participants were given a finisher’s medal and a stalk of flower each.

They later celebrated the end of the event by dancing to Zumba moves and cheering on winners of the race during the prize presentation.