Impressive support for run in aid of refugees

Participants sprinting towards the finish line of the 2km route outside the Shah Alam Stadium.

THRONGS of well-wishers showed their support for the World Taekwondo Malaysia Humanitarian and Refugee Run 2018 at the Shah Alam Stadium.

It was held in conjunction with Malaysia hosting the World Taekwondo Malaysia Open G1 Championship 2018 in Putrajaya from tomorrow to Sunday and to raise funds for the Taekwondo Humanitarian Foundation based in Switzerland.

The Shah Alam fun run was part of a series of 21 running events held around the country, with the runs in Kuala Lumpur, Malacca, Negri Sembilan, Penang, Perlis, Pahang, Sabah, Sarawak held simultaneously. 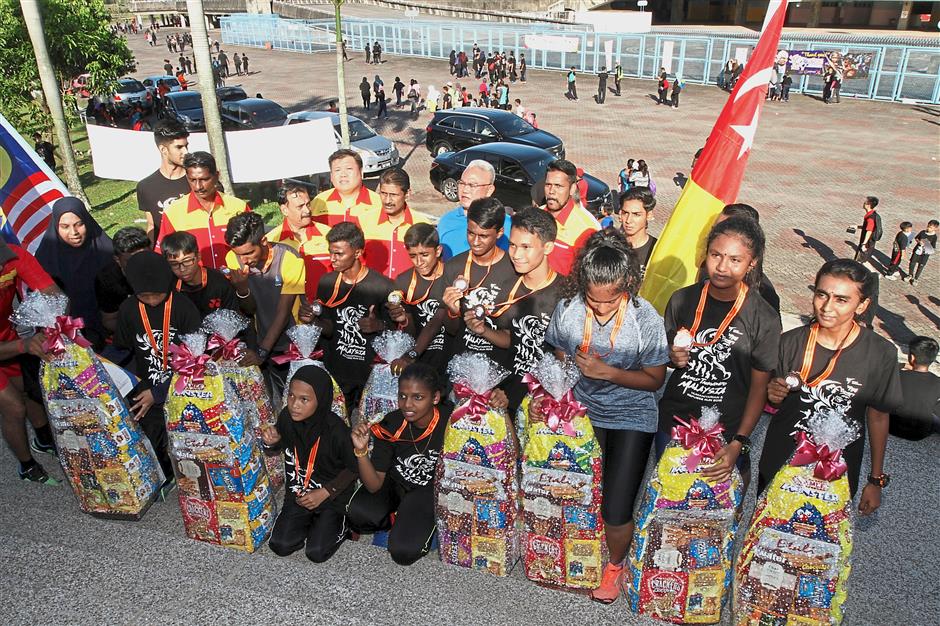 Noh Omar (in blue) with officials and the fastest runners of the fun run.

Taekwondo Malaysia had initially set the target of attracting more than 30,000 people to the runs to spread awareness for refugees.

“I think we have reached the target. But more important than that, is about raising awareness. With our country being multiracial and harmonious, we are like a role model for the world.

“The runs will give the young generation a chance to learn about the plight of refugees. What we are doing is putting them in a situation where they can learn for themselves what this is about,” said Vigneswaran (From right) Vigneswaran writing his wishes on a giant scroll while Noh Omar and Karan look on during the event.

Selangor Taekwondo Association president C.K. Karan said Malaysia was the first country in the world fraternity to organise a humanitarian run in aid of refugees.

The fastest runners in each of the four categories received hampers and medals.

Exponents from 25 countries will vie for points that count towards their international ranking and Olympic Games qualification.