An exponent showing his skills in a bout.

A DIFFERENCE of four bronze medals helped taekwondo exponents from Perak keep the honour of being the champion state for the second year running.

It was almost a neck-and-neck battle in the National Taekwondo Championship 2017 because Kedah went dangerously close to kicking Perak off the champion’s board.

Both states bagged six gold and four silver medals. The Perakians then got eight bronze medals while the Kedahans bagged four.

“All the teams wanted to dislodge Perak as the defending champion but Perak still managed to defend their title.

“We congratulate the Perakians and I’m sure the other states will work even harder this year to beat them in the next championship,” he said. Lim (centre, white shirt) posing with participants and committee members of the taekwondo associations during the launch of the championship at Dewan Sree Mariamman in Butterworth, Penang. — Photos by MUSTAFA AHMAD/The Star

Although Kedah missed the chance to claim the champion’s glory, their woman exponent managed to hog the limelight.

The 26-year-old exercise therapist who bagged the championship in 2016 said she was confident of a repeat.

“After winning in 2016, I continue with my rigorous training and the result says it all,” said a jubilant Nur Shafiqah.

The champion in the Best Male category was J. Dinesh from Kuala Lumpur.

He bagged the gold in the third-dan pattern and silver in the below 57kg free sparing. 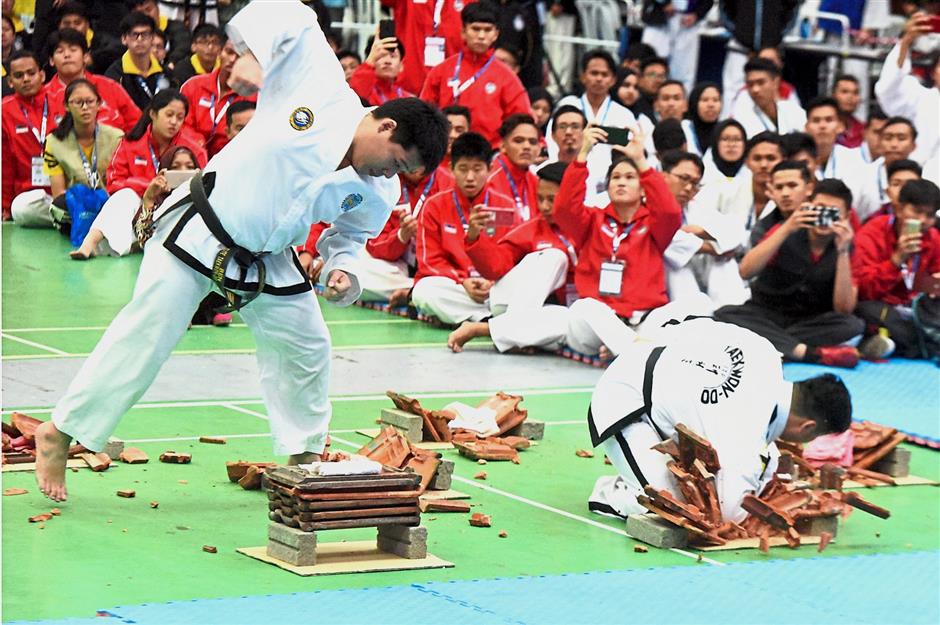 Dinesh, 30, a taekwondo instructor said he had expected to be crowned champion because he knew he did well.

“I was aiming for it and trained very hard from the day I signed up.

“It was not easy. I train six days a week. You must put in a lot of hard work to be good,” he said.

The championship attracted 250 exponents from all over Malaysia. It was organised by the North Peninsular Malaysia Taekwondo Association.

“We are grateful to the affiliates of ITFM for sending their contingents and competitors.

“As this tournament brings the best of Malaysia’s taekwondo exponents together, we had expected high quality performances,” he said.

He said such national events further promote Penang not only as a tourist destination but also as a sporting event destination.

He said his association currently has 3,000 active members and 80 certified instructors teaching in more than 100 centres and schools. Participants going through a routine during the launching ceremony.

Event organising secretary Steven Lee said he was confident that encouraging students to take up taekwondo would discipline them, foster a sense of belonging and promote harmony.

Penang Chief Minister Lim Guan Eng opened the event and said the state government had allocated RM10,000 for the championship.

“Championships such as this are held to allow athletes to benchmark themselves against the best and as a platform for the national organisations to find the best athletes for international competitions,” he said.

He added that taekwondo was not only a sport but also a martial art requiring exponents to embrace the taekwondo oath and understand the tenets of the art, which are courtesy, integrity, perseverance, self-control and an indomitable spirit.