A group photo of the Ironkids participants. The category was introduced in 2015.

The 2017 Ironman Malaysia ended on a high note as close to 2,000 athletes raced across Langkawi island to earn their title as a finisher.

Ironman Malaysia has operated the race since its return to the island in 2014.

This year’s event saw more than 70% of registered athletes coming from over 60 countries.

The top five countries were Japan, Singapore, China, Australia and the Philippines.

Thirty-five athletes from 19 countries in the professional category competed for qualifying points and personal best times, as well as the pot of US$25,000 (RM102,000) prize money.

The high volume of local and international athletes that thronged Langkawi over the course of the five-day race week certainly brought the island to life, at the same time boosting the tourism income of the islanders. 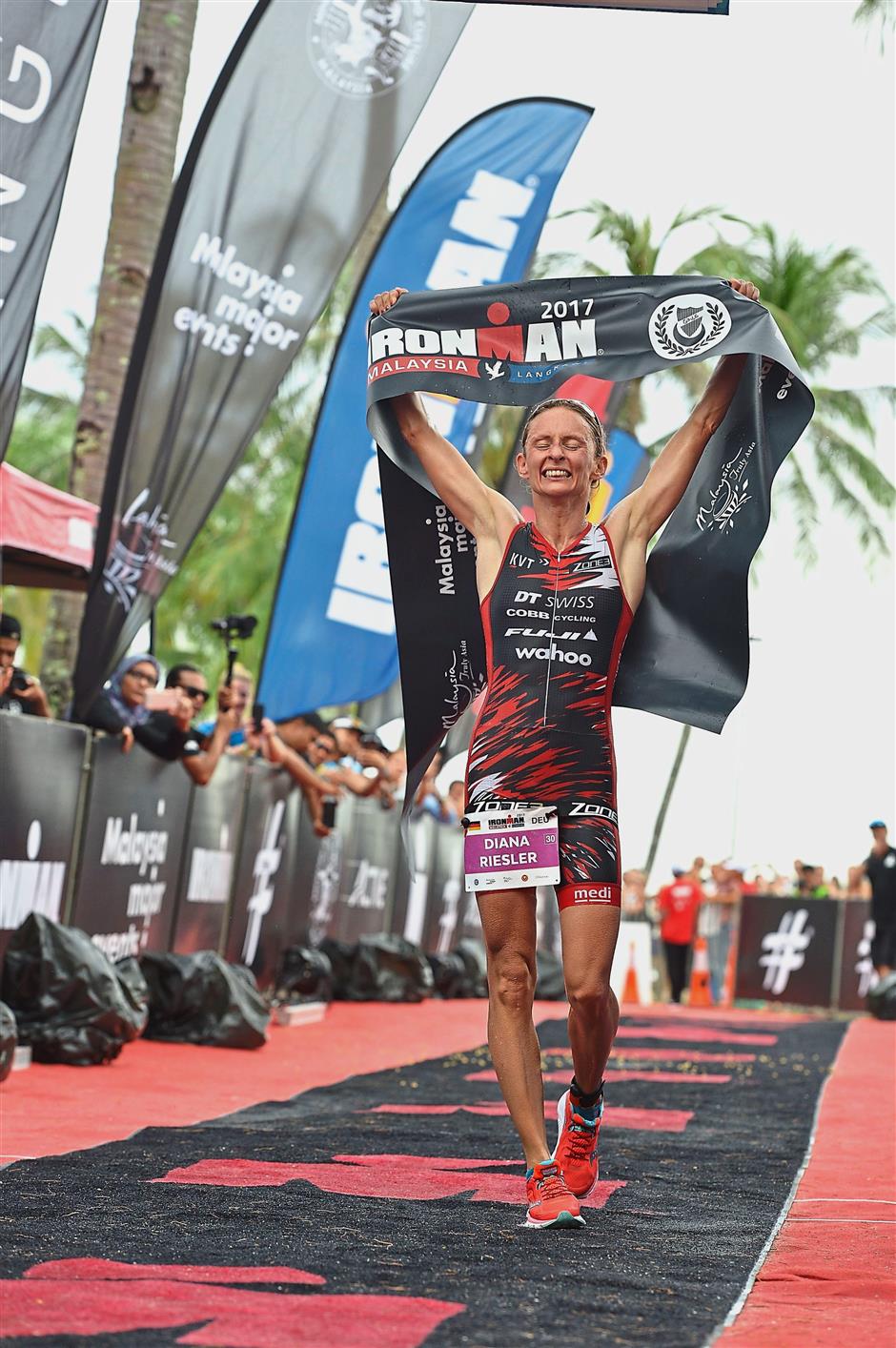 Defending champion Riesler won the ladies title for the fourth time in a row.

Malaysia Convention & Exhibition Bureau (MyCEB) chief executive officer Datuk Zulkefli Sharif said, “On behalf of the Tourism and Culture Ministry, I would like to congratulate the champions and the participants of Ironman Malaysia for their pure determination and exceptional mettle to cross the finish line.

“I would also like to commend the organisers, World Endurance Malaysia and partners for successfully putting together a remarkable event; bringing together athletes, fitness enthusiasts, their family and friends, while placing Malaysia on the map for high-level sports tourism,” said.

Frenchman Romain Guillaume, who was in command throughout the men’s race, grabbed first place with a course record time of 8:32:53.

He previously attempted the 2015 and 2010 editions, coming in 20th and 3rd place respectively. 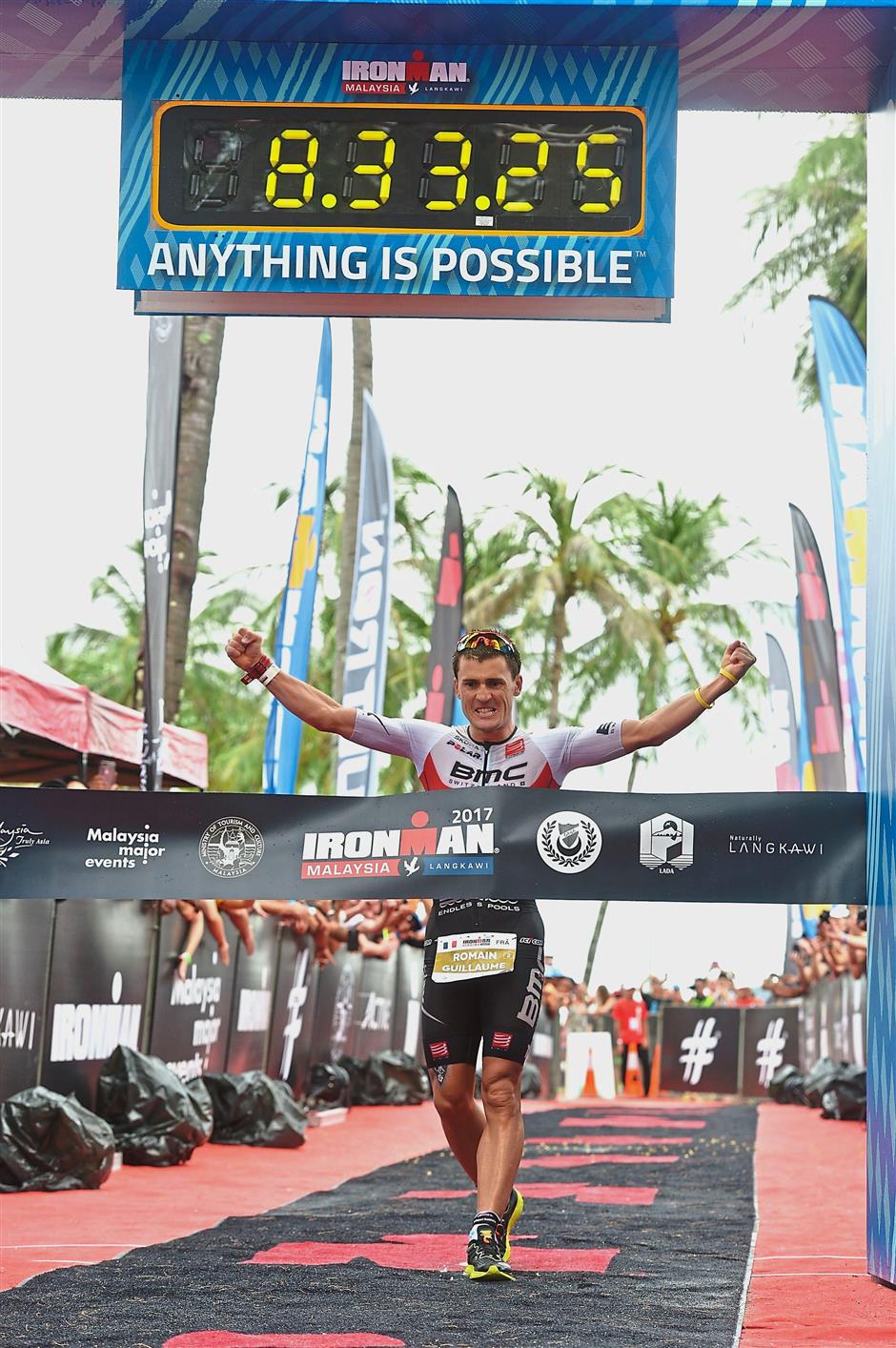 Guillaume at the finishing line, coming out tops among the men.

In the women’s race, German Diana Riesler extended her remarkable record-setting run with a fourth straight victory at Ironman Malaysia.

All that stood between her and history was a solid marathon, which she achieved, winning in 9:19:00 to extend her outstanding record at Langkawi.

Fellow German Mareen Hufe, who has established an outstanding record and is always tough late in the year finished second.

While Riesler and Hufe are seasoned performers, there was joy for Frenchwoman Manon Genêt who earned her first podium in her rookie year as a professional, finishing third.

“I’m very happy that I get to defend my title for the fourth time in a row,” exclaimed Riesler.

“I do believe I have a special bond with Langkawi. The people are friendly and nice and I get to see seagulls every time I’m here. I think that is pretty special.

“The three disciplines went well for me. I love the rain this time and managed to adapt to it in no time,” added Riesler.

The event offered 50 slots for the top athletes across all categories to the 2018 Ironman World Championship which will take place on Oct 13 next year in the island of Kailua-Kona, Hawaii.

The Ironkids, which was introduced in 2015 to promote a healthy and active lifestyle to children, saw over 200 children from the ages of four to 17 taking part in three categories distances.

The event was supported by Malaysia Major Events (MME), a division of Malaysia Convention & Exhibition Bureau (MyCEB), an agency under the Tourism and Culture Ministry.