(Reuters) - Colombian junior welterweight boxer Luis Quinones died on Thursday night after being knocked out in a fight against Jose Munoz in Barranquilla, Colombia, five days before.

The 25-years-old had a final record of 10-1 and had been in a coma after collapsing on the floor in the eighth round of the fight, according to ESPN.

The promoter of the fight Cuadrilatero Boxing released a statement on social media after Quinones was pronounced dead at North General Clinic in Barranquilla.

"Cuadrilatero Boxing is deeply saddened by the death of Luis Quinones, an exceptional and disciplined human being, who always showed the greatest commitment to this sport," the statement said.

"Luis was passionate about boxing, so much so that he left his hometown of Barrancabermeja to continue his career in Barranquilla and become a national athlete." 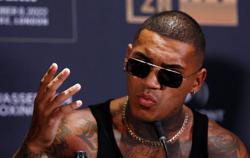 Boxing-Alvarez says he is on track for May return after wrist surgery
Boxing-Usyk promoter says IBF mandatory will not affect unification bout with Fury
Boxing-Australia's Fenech awarded world title 31 years after controversial draw
Boxing-Usyk will do anything to beat Fury but will not aim for knockout
Boxing-Usyk only interested in fighting Fury next
Boxing-Ukraine's Lomachenko returns to ring after fighting for his country
Boxing-Benn relinquishes boxing licence after positive test
Boxing-WBC champion Fury to fight Chisora for third time
Boxing-Haney seals unanimous victory in Kambosos rematch to retain titles
Boxing: UKAD investigating Benn after failed dope test