American Fuchs focuses on victory to keep away mental fear 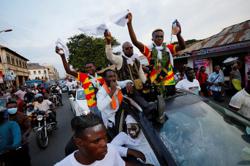 TOKYO: For someone who suffers from fear of contamination, the decision to travel to the Tokyo Olympics amid the Covid-19 pandemic was not easy for United States boxer Virginia Fuchs.

But the dream of winning an Olympic gold medal convinced the 33-year-old flyweight boxer to make the long trip.

Fuchs, fondly called “Ginny the pirate” by her teammates, took the first step towards achieving her goal when she defeated Russia’s Svetlana Soluianova by 3-2 on points in her opening bout yesterday.

While undergoing treatment for anorexia at the age of 12, she was diagnosed with obsessive compulsive disorder (OCD) and she says she has to deal with her contamination fear from the moment she wakes up to the moment she goes to sleep.

“It’s all about the gold medal,” she said at the Kokugikan Arena, where her teammates filled the bowl-shaped indoor stadium with shouts of “Go Ginny” from the stands.

“We’ve been travelling, I lived in a hotel for a month and it’s very hard for me. And I tell myself every day, ‘Don’t worry’. I have those thoughts and it bothers me, but I always put the gold medal in front of those thoughts and that’s what pushed me through every day.

Fuchs showed early promise as a distance runner and wanted to go to the Olympics since she was a little girl to compete in running but realised she did not have enough talent to qualify. She picked up boxing gloves next and went on to win bronze at the 2018 World Championships and a silver at the 2019 Pan American Games.

Fuchs said she was adjusting to the Olympic life but “everyday is still a struggle”.

“I’m not gonna lie, it is hard,” said Fuchs, who will next meet Stoyka Zhelyazkova Krasteva of Bulgaria.

“But again I am not gonna let those little things take away from what I’m here to do.

“I have worked 10 years to get to this point. So, I’m not gonna let one second of my contamination fear get in the way.” — Reuters