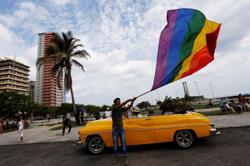 BANGKOK (Reuters) - Boxing will start with a clean slate for the Tokyo Olympics following an acrimonious contest at the 2016 Games, with the sport's troubled governing body and all 36 of the Rio officials barred from any involvement in the competition.

With a history dating back to the ancient Olympics and bouts at every Games in the past century, boxing's passion, popularity and place at the Olympics is rarely in question, but persistent disputes over judging quality have blighted successive contests.

A special task force running the Tokyo competition in place of the suspended International Boxing Association (AIBA) is eager to win back trust of boxers and teams by ensuring fair fights and consistent scoring to keep allegations of foul play to a minimum.

New transparency measures have been introduced under boxing task force chief Morinari Watanabe, such as displaying each judge's scores at the end of each round and independent third-party supervision, vetting and selection of judges and referees.

Watanabe, a boxing newcomer who also heads the International Gymnastics Federation, has said the sport needed to reorganise to earn the confidence of its competitors.

AIBA, under new leadership, has promised reforms to fix financial and governance issues to be recognised again by the International Olympic Committee before the 2024 Paris Olympics.

Boxing will take place from July 24 to Aug. 8 at Tokyo's Kokugikan Arena, the spiritual home of sumo wrestling and in recent weeks a site for COVID-19 vaccinations.

The competition will feature more women fighters, with five weight divisions, up from three in Rio, and the men's contest reduced from 10 to eight divisions, in an effort to address a gender imbalance.

Aside from the judges, much remains the same as in Rio, with a 10-must scoring system and three, three-minute rounds and professionals allowed to compete.

Despite the pandemic interrupting qualifying competitions, a strong field is expected with big teams from Russia, Britain and Uzbekistan - a winner of seven gold medals in this year's Asian championship and joint top with Cuba with three Rio golds.

Uzbek flyweight Shakhobidin Zoirov has a title to defend from Rio, as does Cuba's Julio Cesar La Cruz, a light-heavyweight or heavyweight.

Another contender is Filipino middleweight Eumir Marcial, a professional signed by the promotions company of eight-division world champion Manny Pacquiao, who has been giving Marcial advice and last week tipped him to take home the Philippines' first ever Olympic gold.

As reigning world and European champion, Britain's Lauren Price is a contender for the women's middleweight title, while 38-year-old Mary Kom, a parliamentarian and Asian, Commonwealth and six-time world champion from India, may have her last shot at an elusive Olympic gold in the flyweight.