Rivals for gold aplenty but Syazirol will roll with it 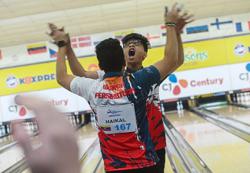 YOUNG bowler Syazirol Syamsuddin believes he has the mettle to finally roll down a gold medal in the Malaysia Games (Sukma).

The 22-year Kedahan has had a frustrating affair with Sukma ever since he started competing in 2018.

He has yet to garner a single medal and is determined to make his last outing this time a golden one.

But the obstacles seem aplenty.

Syazirol has to contend with some of his teammates in the national set-up like Nevern Netaneel (Sabah), Mohd Shafiy Zaim (Penang) and Akmal Qayyim Ali Hanafiah (Federal Territories).

Talented juniors like Megat Zaqrul Haiqal Megat Zairudin (Penang), Ahmad Azriq Izamudin (Federal Territories) and Airel Amri Suhaimi (Johor) can also be expected to give him a run for his money.

Syazirol, however, said he would be focused on his own game rather than dwell on the threats from within.

“It boils down to my own game on competition day. I’ve to stay positive, make a good start and maintain that momentum,” he said.

“I want to make my final outing a memorable one and then look forward to bigger competitions.”

He added that the camaraderie in the Kedah team will also be a factor.

“The team spirit is high and my teammates know this is going to be my last Sukma. They’ll be cheering me on and that’s an added motivation.” To ‘Ah Sir’ with love – keglers bowl Holloway over with glowing tribute
Outgoing coach: Bowlers will do well under Ben
Timmy loses in semis but girls stay on track for team gold
Losing by just one pin feels like needle to men’s quartet
May the ‘best friend’ win as Rafiq and Timmy collide in quarters
Women’s team stage great comeback to reach semis of IBF World Cup
Men’s quartet look good to reach last eight in IBF World Cup
Timmy to teammates: Keep up the good show
Natasha thanks her lucky stars after squeezing into elimination round
Timmy shows ’em why he deserves to be in elimination round