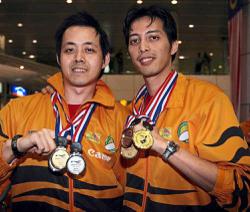 PETALING JAYA: It’s a tall order but national junior bowler Megat Zaqrul Haiqal Megat Zairudin wants to emulate the feat of the elite and backup squad who always win something in every major championship that they take part in.

The 19-year-old southpaw said the recent SEA Games in Vietnam will inspire the young charges as many did not expect the backup bowlers to do well.

In Hanoi, Malaysia won the men’s and women’s team silver medals, and the duo of Nur Syazwani Sahar and Gillian Lim won bronze.

Megat said the outing had inspired the juniors to win at least a medal from the International Bowling Federation’s (IBF) World Under-21 Championships in Helsingborg, Sweden, which started yesterday and will end on June 29.

The tournament replaces the now-defunct World Youth Championships (WYC), which was last held in Michigan, the United States, in 2018.

“Malaysia have always been winning medals in team events in any major competitions. We want to continue that tradition in Helsingborg. The outing in SEA Games has inspired us,” said Megat.

“But it is a daunting task, that’s for sure, because most of us are participating in a World Championships for the first time ever,” siad Megat who will take part in the men’s singles today.

“All the nations have sent their best player to bowl but I believe Malaysia have the chance to win just like my senior team.”

Megat is especially thankful to have Alex, who’s also a lefty.

“There are many kinds of knowledge that he imparts to us, like understanding the transition of lanes and so on. It’s been great.”