A SURPRISE gold was the best that had been expected of the young bowling team, made up almost entirely of first-timers but they delivered two silvers instead - one each in the men’s and women’s team.

With the experience under their belt, they believe they can do better in the Cambodia Games next year.

Nora Lyana Nastasia Kamal believes both the men’s and women’s teams will bounce back in Cambodia after the double silver feat at the Royal City Bowling Alley in Hanoi on Thursday.

Both teams had also threatened to win the gold by taking the overnight lead after the first block.

Nora, together with Gillian Lim, Nur Syazwani Sahar and Nerosha Keligit, settled for second with 4,951 pins. Nora was the pick of the bunch as she had the highest score among the four with 1,330 pins.

Singapore’s Daphne Tan, Bernice Lim, New Hui Fen and Cherie Tan came from behind to take the gold with a score of 5,049 pins.

Nora, 25, said she was proud of everyone in the team.

“We trained hard and to get silver in our first outing means a lot. Most importantly, we are continuing the legacy of our seniors,” she said.

“Singapore sent their senior team, and also brought some of their world champions. To be honest, we were honoured to have taken the lead in the first block.

“In the second block, we fought to the end, but they managed to win. All of us in the women’s team are first-timers, so the experience in Hanoi was valuable.”

Asked if she would want revenge over the Singaporeans in the next Games, Nora said: “Revenge? Definitely. This is just the beginning for us. We will come back more experienced, that is for sure.

“I believe the outing in the SEA Games has boosted our confidence. I am sure we will give a better performance and fight in every event that we take part in.

“I want to thank our coaches, Holloway (Cheah), Wendy (Ng) and Gerald (Samuel), who guided us before, during and after the competition. Especially for the team event.” 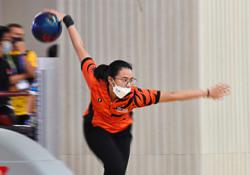