FILE PHOTO: U.S. basketball player Brittney Griner, who was detained at Moscow's Sheremetyevo airport and later charged with illegal possession of cannabis, sits inside a defendants' cage before the court's verdict in Khimki outside Moscow, Russia August 4, 2022. REUTERS/Evgenia Novozhenina/Pool

The Phoenix Mercury center was arrested Feb. 17 with vape cartridges containing cannabis oil in her luggage.

Griner, 31, was sentenced to nine years in a penal colony on Aug. 4 on drug smuggling and possession charges.

On Monday -- Labor Day in the United States -- the Women's National Basketball Players Association issued a plea on social media for all U.S. union members to sign a Change.org petition in support of Griner.

Diplomats for Russia and the U.S. have reportedly discussed a prisoner swap to bring Griner and fellow American Paul Whelan home in exchange for the release of convicted arms dealer Viktor Bout. 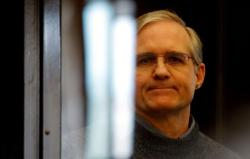 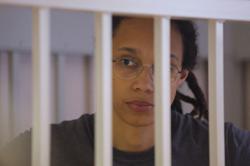