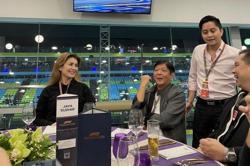 All smiles: Anthony Liew Wen Qian at the Asean University Games in Thailand.

Despite winning a silver medal from the Asean University Games in Thailand, Anthony is not satisfied with it.

“I feel disappointed for taking home just the silver medal. With our line-up, we could’ve won gold,” said Anthony.

On Saturday, Malaysia went down fighting 44-59 to Thailand in the final.

They lost to Thailand 58-63 in the first qualifying round but managed to come back stronger to beat the Philippines 74-53 and Singapore 64-47 before the showdown.

The 26-year-old Anthony believed that they did not perform up to their standards which had caused them to lose the gold medal.

“Everyone, including myself, is responsible for the loss and for putting up the ‘not-so-up-to-standard’ performance throughout the tournament,” said Anthony.

“The aspects that can be improved are the stability and consistency of our offensive play as we did poorly on the scoring percentages, whether it is under the basket or three-point shots.”

However, as the most senior player of the team, Anthony lauded his team’s defence which had improved in just two months time.

“Our defence has improved astoundingly over the two months of training together and I’m proud of my teammates in this aspect,” he said.

During the match against the Philippines, one of the key players, De Wee Yiang, was injured with a deep cut on his eyebrow.

He joined the crowd to cheer for the team as he was unable to play in the following match.

Wee Yiang could only join the team on court in the final round.

“We were worried about Wee Yiang’s injury, not only if he was able to play but also for his health because the injury had caused him slight fever and pain,” said Anthony.

“He cheered his heart out on the bench, which boosted the team’s morale during important moments of the match.”

The national team have been slated to participate in the Thailand Super League in Bangkok next month.

Meanwhile, the women’s team also won a silver after losing 57-80 to Thailand.