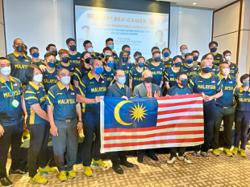 Both the 5x5 and 3x3 teams are feeling more optimistic about their chances after several good performances recently.

Besides, the 3x3 team emerged as the runners-up in the recent Asean Basketball League (ABL) 3x3 International Champions Cup in Bali.

The Malaysian Basketball Association (Maba) president Datuk Seri Lee Tian Hock had also stated that he was feeling hopeful that the teams can deliver medals this time around.

“We need to use the right strategy during the matches. This could be key for us. We also need to fight and stay positive,” said Tian Hock.

The teams were also encouraged by a generous incentive announced by Tian Hock for the medal winners.

RM50,000 will be given to each player if they win gold while RM20,000 and RM10,000 each will be rewarded if they win silver and bronze respectively.