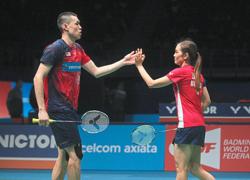 All set: Goh Soon Huat-Shevon Lai Jemie will face Denmark’s Mathias Christiansen-Alexandra Boje in the first round of the Indonesian Masters.

PETALING JAYA: The task has not got any easier for independent mixed doubles pair Goh Soon Huat-Shevon Lai Jemie at the ongoing Indonesian Masters despite the withdrawal of several top pairs.

China’s world No. 1 Zheng Siwei-Huang Yaqiong, Japan’s Yuta Watanabe-Arisa Higashino (No. 2) and Thailand’s Dechapol Puavaranukroh-Sapsiree Taerattanachai (No. 4) have all opted to give the tournament in Jakarta a miss.

World No. 7 Soon Huat-Shevon though, are still wary as they have a few seeded pairs in their half of the draw (bottom half) such as France’s Thomas Gicquel-Delphine Delrue (No. 5), compatriots Tan Kian Meng-Lai Pei Jing (No. 6), and homesters Rinov Rivaldy-Pitha Haningtyas (No. 9).

“For us, I think the draw hasn’t changed much. We still have several strong pairs awaiting us. So, I don’t think there will be much difference for us in the first few rounds for now,” said Shevon.

Soon Huat-Shevon could cross swords with Gicquel-Delrue if both reach the quarter-finals.

Before that, the Malaysians have a tricky opening round match against Denmark’s world No. 14 Mathias Christiansen-Alexandra Boje in their first meeting in the international stage.

A win will see Soon Huat-Shevon play either another Danish pair Mathias Thyrri-Amelia Magelund (No. 32) or Taiwan’s Chang Ko-chi-Lee Chih-chen (No. 37) in the second round.

On their first round match against Chritiansen-Boje, Shevon said: “It will be an exciting match for us because this is our first meeting in international tournaments.

“Also we need to overcome the challenges of playing at the Istora Senayan.

“This stadium is famous for its strong drift and the thundering cheers from the crowd there.

“So you would have to control the shuttle by not being able to hear the hitting sound of the shuttle.”

Shevon is hoping to do better in Jakarta after suffering back-to-back early round exits in the Malaysian and Indian Opens at the hands of Siwei-Yaqiong.

“So far this year, we only managed to play three matches in total.

“Overall, I think I’m not quite satisfied yet with our performances. We need to improve on our self-confidence and consistency,” said Shevon.