Viktor the conqueror: No other player for now seems capable of stopping the Axelsen juggernaut in the World Tour Finals in Bangkok.

PETALING JAYA: The men’s singles challenge is expected to be a one-sided affair as the all-conquering Viktor Axelsen is expected to be just too strong for the field at the World Tour Finals which begins today.

Former international Datuk Rashid Sidek said, with the exception of 2021 world champion Loh Kean Yew of Singapore, no other player is capable of stopping the Axelsen juggernaut in Bangkok.

The Dane has won five Badminton World Federation (BWF) world tour titles to go along with the world and European crowns this year.

Rashid went on to add that Axelsen, the world No. 1, may have been forced to work harder if world No. 2 Lee Zii Jia had qualified for the season finale.

Zii Jia missed out after losing to China’s Lu Guangzu, who made the cut to Bangkok, in the last 16 of the Australian Open in Sydney last month.

The Malaysian was stuck at No. 9 as only the top eight qualify for the Finals.

Axelsen is in an easier Group A with H.S. Prannoy of India, Kodai Naraoka of Japan and Guangzu while Kean Yew is in a tougher Group B with Chou Tien-chen of Taiwan, and Indonesian duo Anthony Ginting and Jonatan Christie.

“It is for Viktor to lose it. There is no player capable of beating him in Bangkok. That’s how consistent he has become,” said Rashid.

“Zii Jia may have given Viktor a run for his money as they have had some close matches before.

“Kean Yew is capable of causing an upset but he has to negotiate a difficult group stage first.”

The Singaporean defeated Axelsen at the Denmark Open quarter-finals (in October) before losing to Zii Jia in the last four.

Axelsen warmed up for the title assault with the BWF “Male Player of the Year” award on Monday.

“Winning this award at the end of the year means a great deal. It’s a recap of the whole year, and when you win this with so many great nominees and amazing opponents, I’m really, really happy,” said Axelsen.

Axelsen opens his campaign against youngster Guangzu while Kean Yew will be involved in a battle royale with Tien-chen today. 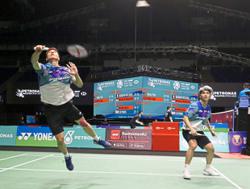 Chong Wei to be part of Technical Advisory Panel at ABM
Liek Hou may still be in the running for 2028 Paralympics gold
First real test awaits Tze Yong in quarter-finals
Vountus quits BAM to broaden his horizons in Australia
Rexy: Wei Chong-Kai Wun must change attitude in Olympics quest
Jones not too worried over Aaron-Wooi Yik’s dry spell
Nova: Patience is key for June Wei to upstage Angus
Jun Hao goes down to lower ranked compatriot
Pearly-Thinaah need to build up on their strength
Joint camp for Asian meet to start next week