PETALING JAYA: Aaron Chia-Soh Wooi Yik will be involved in a rematch of the World Cham-pionships men’s doubles final when they take on Indonesians Moha-mmad Ahsan-Hendra Setiawan in the opening Group B match of the World Tour Finals in Bangkok today.

Aaron-Wooi Yik defeated the veterans to become the first Malaysian pair to win the world title in Tokyo in August and this makes their clash today a mouth-watering one where Ahsan-Hendra will be aiming for revenge.

The other pairs in Group B are Liu Yuchen-Ou Xuanyi of China and Kim Astrup-Anders Skaarup Rasmussen of Denmark.

Coach Rexy Mainaky said the opening match is a good test to gauge Aaron-Wooi Yik’s current form and he also felt it was too early to predict how the group fixtures will pan out.

“This is the first match, so let’s see how Aaron-Wooi Yik perform.

‘‘They must be focused and play their own game, and should not allow the opponents to dictate terms,” said Rexy.

“The preparations have been good but we can’t say Aaron-Wooi Yik are in an easier group. This is the World Tour Finals, all the pairs are strong.

Independent pair Ong Yew Sin-Teo Ee Yi are the ones facing a daunting task as they have to battle with former world champions Takuro Hoki-Yugo Kobayashi of Japan, Indonesians Fajar Alfian-Rian Ardianto and Choi Sol-gyu-Kim Won Ho of South Korea for the semi-final slots.

Yew Sin-Ee Yi have a tough opening match against Hoki-Kobayashi.

Women’s doubles pair Pearly Tan-M. Thinaah are in for another tough time as they will be against China’s world champions Chen Qingchen-Jia Yifan, another rising China pair Zhang Shuxian-Zeng Yu and Indonesians Apriyani Rahayu-Siti Fadia Ramadhanti in Group B.

It will be a feat if Pearly-Thinaah can advance to the knockout stage from this group, a result that would further boost their confidence to take on the top 10 pairs.

Malaysia have a fighting chance in the mixed doubles where Goh Soon Huat-Shevon Lai Jemie could see themselves in the last four.

“I think the group is evenly matched and have the chance to reach the semi-finals. Much will depend on their performance on the day,” said Eei Hui.

Soon Huat-Shevon will begin their campaign against Rinov-Pitha and victory will put them in a good position to claim a semi-final spot.

In Group B, Tan Kian Meng-Lai Pei Jing will take on Wang Yilyu-Huang Dongping today. Thailand’s Dechapol Puavaranukroh-Sapsiree Taerattanachai and Supak Jomkoh-Supissara Paewsampran are the other pairs in the group. 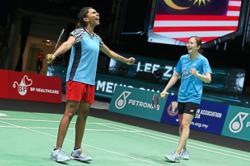 KLBA donate RM15,000 to B40 students under Projek Jejak Juara
Speedy progress shows Justin’s catching up fast with seniors
No easier way to Paris
Thinaah enjoying it in camp, wants teammates to play without pressure
Tze Yong to skip German Open to focus on training
Zii Jia sticks by decision of not getting coach to guide him
Nova planning tougher training regime for Jin Wei
I hope the new pairs can click and flourish, says Rexy
Arif sad to part with Haikal but accepts decision
Ee Yi game for a new role in Dubai if team strategy calls for it