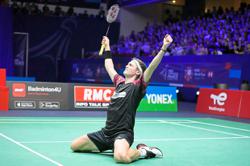 Yuqi, who only made his return to competitive action in August after serving a 10-month ban for indiscipline, made up for lost time in style when he captured the Denmark and Australian Open titles over the last two months.

In Denmark, the Chinese ace toppled the likes of Taiwan’s Chou Tien-chen (world No. 4) and Malaysia’s Lee Zii Jia (No. 2) en route to lifting the title.

Yuqi’s impressive performances has propelled him from No. 43 to No. 30 in the latest world rankings.

“Yuqi has always been a good player but has always been under the shadow of Lin Dan and Chen Long. Now that the duo have retired, it’s Yuqi’s opportunity to shine and he has taken it with both hands.

“He will now be a dangerous threat to all others,” said Rashid.

Rashid also feels the 26-year-old will provide added competition for Denmark’s world No. 1 Viktor Axelsen and possibly prevent him from dominating like he did this year.

“Yuqi will make the competition in the men’s singles fiercer. It’s good if he can challenge Axelsen for titles. This will be good for the sport,” added Rashid.

The Dane was also crowned world champion in Tokyo in August.

He is now the favourite to lift the prestigious World Tour Finals title in Bangkok from Dec 7-11. Yuqi did not qualify for the Finals.

The Chinese, though, will be looking to continue his red-hot form next year with the qualifying period for the 2024 Paris Olympics set to begin in May.

China will be represented in the Finals by Lu Guangzu, who pipped Zii Jia to the eighth and final spot. 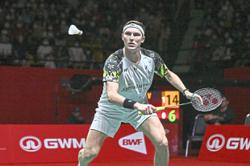