Up for one more big scalp PETALING JAYA: Ng Eain Yow is out to accomplish another difficult mission after his groundbreaking win over world No. 2 Paul Coll of New Zealand in Singapore last week. The world No. 24 will try to end his losing streak to Welshman Joel Makin in the Malaysian Open which begins in Bukit Jalil today.

The top Malaysian pro secured his biggest career win against Coll in five games to reach the quarter-finals of the Singapore Open last week but his good work was undone by world No. 11 Makin.

Eain Yow opens his campaign against Argentina’s Leandro Romiglio before the anticipated clash against Makin in the second round at the National Squash Centre.

The expected clash will be their fifth this year with Makin winning the previous four matches.

“Overall, it has been a good week for me in Singapore where I beat the world No. 16 Saurav (Ghosal of India) and Coll but I have to put that to rest. This week will be another new challenge for me and I hope to reset myself,” said Eain Yow.

“Makin and I have played four times this year and I feel I’m getting closer and closer every time. Last week, I wasn’t physically and mentally up for it any more after my gruelling win over Coll.

“This week I will be going in fresher.

‘‘I think we will have a better game plan to approach him this time and I feel there is a good chance against him.

“I proved last week that if I’m playing at my best, I can beat anyone and I am looking forward to putting up a good performance this week.

“Having said that, I need to be focused on my first match (against Romiglio) tomorrow.”

The men’s event has attracted four of the top 10 players with top seed and world No. 7 Tarek Momen of Egypt aiming for a second title.

The other Malaysian players who will be competing in the event are Ivan Yuen, Syafiq Kamal, Addeen Idrakie and Ong Sai Hung, who has received a wildcard.

Aifa was also boosted by achieving the highest ranking of her professional career as she has moved up from No. 24 to No. 21 yesterday.

She has received a bye in the first round and will play either Zeina Mickawy of Egypt or Ainaa in the second round.

“I need to be mentally prepared for every tournament and I’m looking forward to a good outing here. I also look forward to playing higher-ranked opponents to get quality exposure. I can learn a lot from these matches,” said Aifa.

“I have also earned my highest world ranking today (yesterday) and hopefully, I can end the year in the top 20.”

“The draw is strong and I would like to take it one match at a time but I will be very happy to end that streak,” said Fiechter. 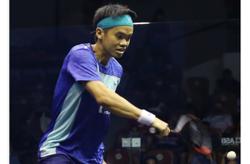 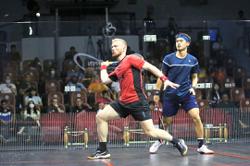