As expected, both Zii Jia and Guangzu reached the second round with commanding displays in their respective opening matches.

The Chinese currently occupies the eighth and last spot in the World Tour rankings and Zii Jia, who is one rung below him in ninth place, needs to win their clash to have any chance of overtaking him.

Zii Jia does have a good record against Guangzu as he has never lost to him in their past two meetings at the 2019 World Championships and 2020 All-England.

The 24-year-old, though, has to be wary as his recent record against Chinese players is not good, having lost to Zhao Junpeng in the third round of this year’s World Championships and Shi Yuqi in the final of the Denmark Open last month.

If Zii Jia manages to overcome Guangzu, he has a good opportunity to reach the final as compatriots Soong Joo Ven (quarter-finals), Ng Tze Yong or South Korea’s Heo Kwang-hee (semi-finals) could be those standing in his way.

Meanwhile, world No. 53 Joo Ven made a successful start after returning from a knee injury with a 21-12, 21-12 win over homester Adam Dolman in his first-round match.

He will take on Indonesia’s Ikhsan Rumbay (No. 82) for a place in the quarter-finals.

Joo Ven has never played the Indonesian before this and is expecting a tricky encounter.

“I’m very happy that I can step into the court again and win my first match after recovering from my injury. I have never met Ikhsan before but he’s definitely one of the top back-up players in Indonesia. So it’s going to be tough but I will definitely give my all,” said Joo Ven.

He will play South Korea’s Kwang-hee, who is ranked one rung above him at No. 32 in the world, in the second round. 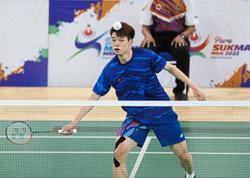