One for the album: The national team posing for a photograph after a team bonding outing ahead of the World Junior Championships in Spain.

Fazriq and his teammates, who are set to compete at the prestigious meet from Oct 24-30, were treated to a team bonding outing ahead of the competition.

The get-together organised by the Badminton Association of Malaysia (BAM) included an enjoyable Escape Room session and a team dinner.

“It was a really good team outing for us. We managed to work as a team while playing Escape Room and it was really fun. It was also the first time that I played Escape Room.”

And buoyed by the get-together, Fazriq is more determined than ever to give his best performance along with Wong Vin Sean.

“Definitely, the outing has given me the motivation to do well in the World Junior Championships,” he said.

“It’s the same for the others in the team. The team spirit is really high.

“Everyone will be playing in their first World Junior meet, so we want to give it our best shot,” added Fazriq.

The youngster will be competing with Vin Sean for the first time since the duo captured the National Under-21 championships in May.

Vin Sean had suffered an ankle injury in August and Fazriq had combined with Jeremy Juan for a short period since then.

Fazriq had then been paired with Chia Weijie for the Malaysia Games (Sukma) but the duo did not get past the first round.

The youngster is now glad to be back competing with Vin Sean.

“I’m definitely happy to be back with Vin Sean because we already have chemistry on court. We will focus on one match at a time and hopefully, we can have a good ending,” said Fazriq.

On their main challengers for the title, Fazriq added: “The biggest challengers for us are pairs from Japan, China, Indonesia and South Korea as these are the badminton powerhouses but I think we have the qualities to match them.” 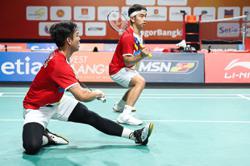