Penang’s Jin Wei, who was considered the hot favourite for the gold, has pulled out to participate in the India International Challenge starting tomorrow.

“Jin Wei has decided to pull out of the Sukma. She has chosen to take part in the India International Challenge instead,” said Razlan.

While Jin Wei’s decision to withdraw from the competition has dealt a blow to the island state’s hopes, it has left the door ajar for the likes of Perak’s Eoon Qi Xuan and Selangor’s Siti Nurshuhaini Azman to battle it out for gold.

“I have not fully recovered from my knee injury. I had minor surgeries on both knees earlier this year and am still working on getting back to full fitness. So, I’m not setting any specific targets for this Sukma and will just give my best,” said Qi Xuan.

The 21-year-old had won a bronze in the individual event and a silver in the team event in the last edition in 2018 in her home state.

After the Sukma, Qi Xuan will turn her attention to the Indonesian Masters in Malang from Oct 18-23.

“I am hoping that my knee will get better soon and I can be in good condition in future tournaments,” said Qi Xuan. 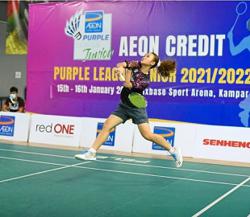