PETALING JAYA: Indian top star P. V. Sindhu’s hopes of challenging for the world title has been dashed due to injury.

The 2019 world champion has confirmed via social media that she suffered a stress fracture en route to winning gold in the Birmingham Commonwealth Games and will skip the annual world meet from Aug 21-28 in Tokyo.

“While I’m on a high of winning a gold medal at the Commonwealth Games, unfortunately I have to pull out of the world meet,” said Sindhu.

“I felt pain and there was an injury scare in the quarter-finals of the Games, but with the help of my coach, physio and trainer, I decided to push as far as I could.

“The pain was unbearable during and after the final. Hence, I rushed for a scan as soon as I got back home to Hyderabad. The doctors confirmed a stress fracture on my left foot and recommended rest for a few weeks,” posted Sindhu in social media.

The injury will come as a huge blow to the world No. 7 as she had been on great form lately, capturing the Singapore Open title last month and her first individual gold at the quadrennial Games.

Sindhu had also been part of the Indian team who won silver in the mixed team event at the Games.

While it was a disappointment for Sindhu, others will be looking to take advantage of her absence.

Malaysia will be represented by Soniia Cheah (No. 40) who is making her comeback after the Tokyo Olympics and S. Kisona (No. 54).

Soniia will open her campaign against Indonesia’s Putri Kusuma Wardani but faces an uphill battle if she wins as she will be up against China’s reigning Olympic Games champion Chen Yufei in the second round. Kisona will play Vietnam’s Vu Thi Trang in the first round. 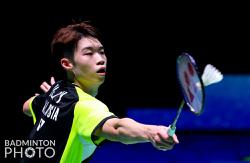