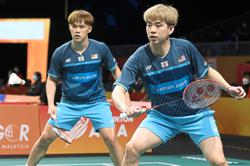 The duo have been drawn to play against Indonesia’s world No. 1 Kevin Sanjaya-Marcus Fernaldi in the first round of the Open in Osaka from Aug 30-Sept 5.

It will be their first meeting against the Indonesians.

Wei Chong-Kai Wun made heads turn by winning the Taiwan Open title after toppling home favourites and Tokyo Olympic Games champions Lee Yang-Wang Chi-lin last month but it will a new start at the Japan Open.

“We know that we have received a tough draw and we will prepare well so that we can produce our best performance,” said Wei Chong.

“For us, winning the Taiwan Open is already in the past. We just hope to do well again,” he added.

Wei Chong and Kai Wun rose six rungs to No. 30 in the world ranking after the title triumph.

However, there could be a glimmer of hope for Wei Chong-Kai Wun to pull off an upset as the Indonesians have been plagued by injuries and poor form this year.

Kevin-Marcus have yet to reach a final this year and their last outing was at the Indonesian Open in June where they were eliminated in the second round.

Before that, they reached the last four of the Indonesian Masters and All-England in March.

The Indonesians will be participating in the World Championships in Tokyo just before the Japan Open which could provide a clearer indicator of their form and fitness.

Wei Chong-Kai Wun meanwhile face their hardest challenge yet on maintaining their consistency. 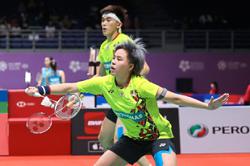