Tough task ahead: Aaron Chia (left) and Soh Wooi Yik need to get past China’s Liu Yuchen-Ou Xuanyi in the Japan Open first round. — AP

PETALING JAYA: The odds are stacked against national No. 1 men’s doubles pair Aaron Chia-Soh Wooi Yik in their bid to bring big cheers to the country as they have been handed a tough draw in the Japan Open in Osaka.

The world No. 6, who finished as bronze medallists in the individual event at the Birmingham Commonwealth Games, need to get past China’s Indonesian Open champions Liu Yuchen-Ou Xuanyi in the first round starting on Aug 30.

If they can beat the giants, Aaron-Wooi Yik could face either compatriots and world No. 12 Goh Sze Fei-Nur Izzuddin Rumsani or Indonesia’s All-England champions Shohibul Fikri-Bagas Maulana in the second round.

A win could pit them against another Indonesian pair Kevin Sanjaya-Marcus Fernaldi, who are also the world No. 1, in the quarter-finals.

Aaron-Wooi Yik will be desperate to bounce back from their disappointing loss to England’s world No. 18 Ben Lane-Sean Vendy in the semi-finals of the quadrennial Games.

They will first focus on the World Championships in Tokyo from Aug 21-28 before turning their attention to the Japan Open.

Another pair, world No. 10 Ong Yew Sin-Teo Ee Yi, have an easier route to the quarter-finals but could face home favourites and world No. 2 Takuro Hoki-Yugo Kobayashi of Japan in the last eight.

Yew Sin-Ee Yi should have little trouble in the first round against Holland’s Ruben Jille-Ties Van Der Lecq but could face a slightly trickier task against world No. 29 Christo Popov-Toma Junior Popov of France in the second round.

Wei Chong-Kai Wun will be hoping to continue their hot form and upset Kevin-Marcus in the opening round while V Shem-Khim Wah will open their campaign against Thailand’s Supak Jomkoh-Kittinupong Kedren. 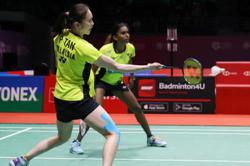