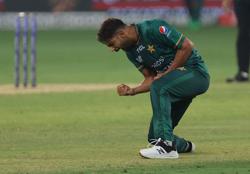 PETALING JAYA: 1967 Thomas Cup hero and doubles international Datuk Ng Boon Bee passed away due to heart problem in Ipoh on Wednesday. He was 84.

"According to his wife Tong Yee Cheng, he suffered an attack while in the car and was rushed to the Ipoh general hospital. He passed away this evening," said Cheng Hoe.

"He was one of the best badminton players the country has ever had. The entire 1967 Thomas Cup team is still around and it is sad to see him go. We have lost one of the greatest sportsmen in the country.

"His wife is a former national player also and he named his son Thomas after our success. A reserved person but a wonderful human being."

Boon Bee and Tan Yee Khan were the integral members of the 1967 Thomas Cup team which dethroned the champions Indonesia in the final in Jakarta. The others who are part of the team are Cheng Hoe, Teh Kew San, Tan Aik Huang and Billy Ng.

Boon Bee and Yee Khan were a formidable doubles pair in the 1960s where they emerged as the All-England champions in 1965 and 1966. Boon Bee later partnered the late Datuk Punch Gunalan to win the 1971 All-England title.

He had also won four Asian Games golds in the men's and mixed doubles and eight gold medals in the SEAP and SEA Games.

As footballer, he was part of the Malaya team that won the Merdeka tournament three times (1958-1960) before he switched to badminton full-time.

He was also active in cricket, rugby and athletics at the state level but badminton had always been his passion. Aaron-Wooi Yik brace for rematch with Ahsan-Hendra in World Tour Finals opener
Singles title’s for world No. 1 Axelsen to lose, says Rashid
Higher prices for Malaysian Open tickets but fans assured of high quality
Choong Hann: Time for Tze Yong to gear up for ‘big boys’ test
Dire need to restore lack of depth in women’s singles standard
Chan to Goh: Let’s have a really good last bash together
Shuttlers want to serve best parting gift for coach Eei Hui
Easier for Aaron-Soh to reach first semis, tougher for Pearly-Thinaah in Finals
Zii Jia spars at BAM as he seeks to rejuvenate next season
Qualifying rules for Tour Finals may need an overhaul