AHMAD Tontowi-Lilyana Natsir and Nova Widianto-Vita Marissa have been the flagbearers for Indonesia’s mixed doubles for almost two decades but no recent pair has stepped up to the plate since their retirements.

Lilyana had been the most decorated player as she has won four world titles – two with Nova (2005, 2007) and two more with Tontowi (2013, 2017) and the pair had later went on to win the Rio de Janeiro Olympic Games gold.

Nova had won most of his titles with Lilyana while his combination with Vita had fewer successes but they were able to compete with top pairs from China and South Korea throughout their careers.

Nova, who has been heading the mixed doubles since, says the current pairs were not strong enough to challenge for major honours just yet.

The fact that the leading pair Praveen Jordan-Melati Daeva have left the national training centre to become professionals has made matters more complicated.

“I’ve been with the senior team for about four years now and currently our pairs are not good enough. It’s hard to get a replacement for Tontowi-Lilyana,” said Nova.

“Praveen-Melati have also returned to their club (PB Djarum) and this leaves us with mostly young players.

“However, we have another two years before the 2024 Paris Olympics and I’m optimistic about having a strong combination by then.

“As for Praveen-Melati, they will also be considered for the Olympics if they can produce results and maintain their position as the top Indonesian pair.”

Nova’s best option in the national team are Rinov Rivaldi-Pitha Mentari, who are ranked 19th in the world, who lost in the second round of the Malaysian Open.

Indonesia will be hoping that Jordan-Melati will rediscover the form that won them the 2020 All England title to have a chance of winning medals in Paris. 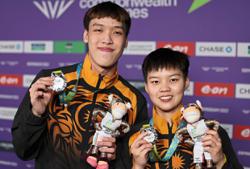