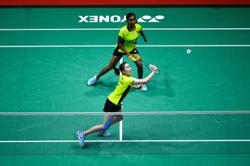 But the player entrusted to do so, Siti Fadia Ramadhanti doesn’t feel burdened by the pressure of filling Indonesian great Greysia Polii’s big shoes.

Greysia, who won the Tokyo Olympics gold with Apriyani Rahayu, has decided to quit the game after the All-England in March this year.

Fadia has been teamed up with Apriyani, and together they have been rocking the world of badminton. They have reached two finals in three tournaments together.

The world No. 133 were the runners-up at the Indonesian Masters last month and yesterday, the unseeded pair stormed into the final of the Malaysian Open after overcoming South Korea’s world No. 12 Jeong Na-eun-Kim Hye-jong 21-14, 22-20 in 44 minutes.

This was not even the Indonesians’ biggest upset win as they had claimed two major scalps earlier, beating Japan’s world No. 5 Nami Matsuyama-Chiharu Shida (second round) and China’s world No. 1 Chen Qingchen-Jia Yifan (quarter-finals).

Today, they face China’s world No. 33 Zhang Shuxian-Zheng Yu in a bid to win their first title together.

The 21-year-old Fadia said she wanted to chart her own path instead.

“Greysia is a great example to all of us. For me, its not about replacing her but learning from her and growing and becoming a better player. I want to follow my own course and hopefully succeed in my career,” said Fadia.

“Apriyani is a great mentor for me and the trust we have for each other is key for us to do well,” added Fadia.

“Our target this year is to break into the world’s top 10. We are still far away and need to chase other pairs. So, we really hope to win the title tomorrow (today),” said Apriyani.

Based on current form, Fadia indeed looks like an ideal replacement for Greysia and more than an able partner for Apriyani and if they keep up their fine form, the Malaysian Open title could be the first of many more titles in their careers.