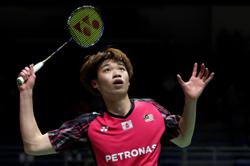 LEE Zii Jia, in the aftermath of his early exit, is contemplating on his participation at next week’s Malaysian Masters but it has got nothing to do with the pressure of winning at home.

Indra Wijaya, who handles the world No. 5, said they need to assess the condition of Zii Jia before making a final decision on his availability for the Masters.

Zii Jia suffered a second-round defeat to Indonesia’s Shesar Hiren on Thursday but the player had taken the setback in his stride.

With the Malaysian Masters being his last warm-up tournament before the World Championships in Tokyo from Aug 21-28, a good result in the event would boost his confidence ahead of the major event. Zii Jia will not be competing in the Singapore Open (July 12-17), Taiwan Open (July 19-24) and has also withdrawn from the Birmingham Commonwealth Games (July 28-Aug 8).

“Living up to the expectation of the public is something Zii Jia must get used to and the Malaysian Open was another chance for him to learn how to handle the pressure,” said Indra.

“If Zii Jia puts his mind to play, he will go all out and that’s why we need to really evaluate his condition before deciding whether he needs to compete in the Malaysian Masters.

“He will not do it just for the sake of competing.

“We have to analyse his matches in tournaments to identify the shortcomings and come up with the programme to be well prepared for the World Championships.

“It has been a long season where he has played about five or six tournaments in the last two months and we have to decide if he is able to play at the Masters.”

Zii Jia had already said that he will not let the defeat to Shesar affect his confidence and his aim is to regain his original form and perform as a top five player on a consistent basis.

The draw in the Malaysian Masters also looks challenging as he will play a qualifier, either compatriot Soong Joo Ven or China’s Li Shifeng, in the first round and could play against top seed Viktor Axelsen of Denmark in the last eight.

The Masters will be a fourth consecutive tournament in five weeks for most of the players, including Zii Jia, and this could also see plenty of withdrawals next week.