New initiative: Founder and managing director of Adnology Labs Kent Chai (left) walking past a long queue at one of the booths.

THE vicinity of Axiata Arena has come alive in a festive atmosphere.

Known as the Malaysian Festival, it has lit up the ongoing Malaysian Open with plenty of street food, entertainment by local artistes and even a drone show for fans to enjoy.

The lively atmosphere has been created by Adnology Labs in an effort to promote local food, culture and sports.

“70% of the food sold is local and we are trying to promote entrepreneurship here as well, with more people encouraged to prepare food creatively to be sold,” said founder and managing director of Adnology Labs Kent Chai.

“There are performances by local artistes, arts and cultural shows and games for the fans to take part in.”

Besides all these, there will be a drone art show involving 300 to 350 unmanned aerial vehicles on the final day of the tournament.

The carnival-like atmosphere to hype up the home tournament has also been designed to promote tourism.

“Tourism Malaysia is one of our sponsors. We want foreign fans to get to know our culture and enjoy our food. So far, the turnout has been good with a few players casually dropping by as well to have some food,” said Kent.

Fans could also watch the final of the competition in a special live screening at the Malaysian Festival.

“Fans can choose to watch the final with their family and friends outside here while enjoying the food,” added Kent. 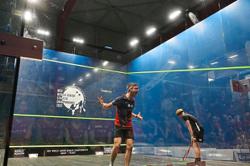 Impressive talent pool at AJBC qualifying round
Rocky road ahead
India’s top pair eye cherry on cake inworld meet
Justin out to make full use of rare opportunity
Injury puts paid to Sindhu’s hopes of vying for world title
Three Commonwealth golds, but Peng Soon far from satisfied
Pek Siah shows a woman coach can be equally successful
Let Rexy scout for right man for the job, says Jones
Chou shows how to stay top
Relief all around as budget approved, so Rexy on the hunt for coach