The Dane can go on elaborating the joy of winning and celebrating with family members.

Everything that he touches has turned into gold and Axelsen, at the height of his powers, has chosen the right time to travel with partner Natalia Koch Rohde and daughter Vega this season.

Axelsen celebrated back-to-back Indonesia Masters and Open titles over the last two weeks in front of his family at the Istora Senayan and carried Vega on to the podium during both victories.

“It feels awesome. It feels special when you have your closest ones next to you when you win,” said Axelsen after his training session at the Academy Badminton Malaysia (ABM) in Bukit Kiara yesterday.

“To be able to have Vega and Natalia and my family - especially having my child on the podium at the last two stops in Indonesia has been something really special.

“While it is good to have the family with me during tournaments, Natalie is expecting our second child and it all depends really.”

Axelsen is also excited to be with his family for the Malaysian Open where he will be chasing a third consecutive title at the Axiata Arena beginning Tuesday.

“I love to be in Malaysia and this time my family is with me,” said Axelsen.

“It’s their first time here and it’s good to walk around and enjoy Malaysia a little bit without thinking about competition right away. They are really enjoying it so far.

“I’ll try to do the same (bring Vega on to the podium) if I win here.”

While Axelsen remained humble as always and refrained from predicting a clear victory at the Axiata Arena, he felt good about his form.

“I feel good about the recent performances. It is not easy to win back-to-back tournaments as it requires a lot of mental and physical energy,” said Axelsen.

“There are so many other good players on the tour and I am fortunate to do really well in recent tournaments.

“So it has been good to have a week in between where I can recover a little bit ... still trying to recover fully but I will be ready for another week at the Malaysian Open.

‘‘And I’m looking forward to playing in front of the Malaysian crowd again.”

Axelsen is not thinking too much about winning three consecutive titles as numbers do not get the cool Dane excited and he is well aware that any player is capable of beating him if he fails to produce his best.

But on current form, it looks tough for any player to stop Axelsen from standing on top of the podium with Vega again – as the first Danish Malaysian Open winner since Peter Gade in 15 years. 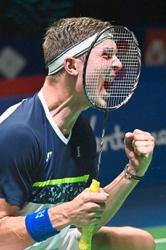