Wai Ching wants to stay as No. 1, just like Chong Wei

PETALING JAYA: Shuttler Lee Chong Wei was ranked No. 1 for 349 weeks and another Malaysian athlete now hopes to follow in his footsteps albeit in a different sport.

Selayang-born Soh Wai Ching took over as the world No. 1 ranked tower runner from Poland’s Piotr Lobodzinski last month and he has no intention of relinquishing his position.

The 27-year-old wants to maintain his current status as long as his legs allow him to continue with the rigorous sport.

“I hope to be like what Lee Chong Wei has done for Malaysian badminton. He was the world No. 1 singles player for many years and I hope to beat that record,” said Wai Ching, who is now in the United States.

On Sunday, Wai Ching made a quick rebound after losing his 19-race winning streak by claiming victory in the Tunnel to Towers Climb NYC in New York.

Wai Ching conquered 2,226 steps in the 104-floor One World Trade Center building in 12 minutes and 46 seconds.

The run is organised by the Tunnel to Towers Climb Foundation that was set up to raise funds to help the victims of the terrorist attack on the Twin Towers on Sept 11, 2001.

It was the sixth win this year for Wai Ching. He lost a race for the first time since 2019 after finishing second in the Tower Running European Championships in Warsaw last month.

“My preparations were not so good as I fell sick after the Tower Running European Championships trip.

“I had a bad flu and sore throat problems at the same time. I was not able to get in more training as I wished to but I managed to do some indoor cycling as the cross training for this event.

“I’m still happy with a win as this was my first time going for this attempt in this famous world landmark.

“I want to come back again and improve on my time. I have a better understanding of the profile of the stairs.”

Wai Ching will next race in the Fight For Air Climb NYC at Penn 1 Plaza on June 11. 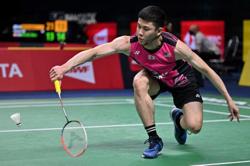