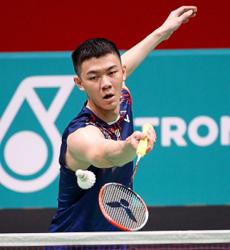 PETALING JAYA: Seasoned campaigner Liew Daren gave some consolation to make up for Malaysia’s defeat to India in the Thomas Cup Finals.

The independent shuttler gave India’s Thomas Cup winning team member H.S. Prannoy a rude awakening after stunning him 21-17, 15-21, 21-15 in the men’s singles first round of the Thailand Open at the Impact Arena in Bangkok yesterday.

The 34-year-old Daren did not play in the quarter-final tie, where Malaysia were shockingly beaten 2-3 by India in the recent Thomas Cup but yesterday, he brought the 29-year-old Prannoy down to earth after a 65-minute battle.

The world No. 34 will next take on Japan’s Koki Watanabe for a place in the quarter-finals.

“It’s good to win. Every match is important for me now. At my age, I just have to treasure every chance to compete,” said Daren

“I know Prannoy was in the team that we lost to but that defeat was not in my mind today (yesterday). I’ve been in circuit for so long, and this match was no different with all the others I’ve had played.

“As for the next match, I’ve lost to Koki once, so it’ll be tough.”

Daren will be joined by world No. 6 Lee Zii Jia who continued his recent winning streak by brushing aside the challenge of Azerbaijan’s Ade Resky Dwicahyo 21-19, 21-9 in only 36 minutes.

Zii Jia will face the winner of the match between Thomas Rouxel of France and Germany’s Kai Schaefer but he should make it to the quarter-finals without much problems.

He has yet to lose a single match since going down to India’s Lakshya Sen in the semi-finals of the All-England in March. He was flawless in his last two tournaments – the Thomas Cup Finals and the Asian Championships in Manila.

While Tze Yong missed out on a chance to upset, Zhao Junpeng of China and Tommy Sugiarto were jumping for joy after packing off second seed Kento Momota of Japan and fourth seed Chou Tien-chen of Taiwan in the opener. Junpeng beat Momota 21-8, 21-11 while Tommy oust Tien-chen 22-20, 14-21, 21-15.

In the women’s singles, Malaysia’s sole representative S. Kisona started well but could not maintain her performance and disappointingly lost out to Indonesia’s Ruselli Hartawan 21-14, 18-21, 19-21. 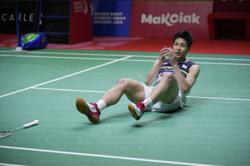 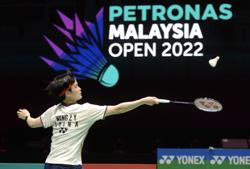