In the running: Leong Jun Hao is one of the shuttlers set to make the team for the Asia championships.

National coaching director Wong Choong Hann will be happy if Malaysia can reach at least the semi-finals of the Asia Team Championships at the Setia City Convention Centre in Shah Alam from Feb 15-20.

The top four teams will earn the right to play in the Finals in Bangkok, Thailand, in May. In the last edition in 2019, Malaysia emerged as the runners-up.

Although Malaysia will still have the service of world No. 7 and independent shuttler Lee Zii Jia to lead the men’s team, Choong Hann prefers to be cautious.

“I would rather not put pressure on the team,” said Choong Hann.

Zii Jia, who has quit the Badminton Association of Malaysia (BAM) to play as an independent player, had announced earlier that he had left the national team as he was unable to handle the pressure in training.

The BAM have announced earlier in a statement that Zii Jia will be included in the Asia Team meet.

“We will prepare the players under BAM and for now, the goal is to reach at least the semi-finals,” he said.

Only Tze Yong, Aidil and Jun Hao are under the BAM.

“Besides Zii Jia, we will name all others from BAM like Tze Yong, Jun Hao and Aidil and other youngsters. My task is to groom players for the future under BAM and I will focus on that,” said Choong Hann.

“We’ll get to name 12 players. Rexy (Mainaky, coaching director for doubles) and I will decide on the numbers soon. I may have five singles and he may want seven doubles. If I have more options, I will give the youngsters a chance to play,” he added. 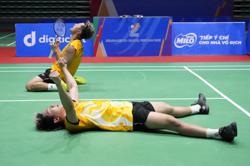